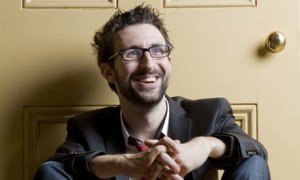 Setting yourself a challenge of going into space, meeting Barack Obama or “changing the laws of the country” are way above and beyond the call of duty for your average comedian.

But even for one as restless and relentless as Mock The Week star Mark Watson, who famously staged a 24-hour stand-up marathon at Edinburgh Fringe, achieving any of those three objectives will prove an ambitious mission. It’s all part of his latest project: to “become an optimist”.

Turning 30 earlier this year forced Watson – who’s a novelist, scriptwriter, environmental campaigner, TV quiz host, husband and father when not doing stand-up – into rethinking many of the beliefs and fears he says have held him back.

So he set himself five challenges to achieve by the time he is 40: to overcome his fear of lightning; play drums at a live gig; drink 50 per cent less alcohol, to stop comparing himself to other people, plus do “something outlandish”. “It was tough limiting myself to five pledges,” he admits.

“Some of it is quite specific: don’t compare yourself to other people; stop drinking so much. You can’t go around expecting to change everything in your life overnight. But I wanted the measure of success to be tangible.”

He’ll be updating his progress on his 10 Year Self-Improvement Plan blog and encouraging online followers to set their own personal goals.

Continuing this contemplative mood of self-appraisal, becoming a better person is one of the themes of the Bristol-born comedian’s third novel, Eleven, which tells the tale of a late-night radio DJ, Xavier Ireland, who is fronting up to childhood regrets through a series of 11 incidents and encounters with strangers.

Describing the book as being “about how relationships change over time”, he explains: “Xavier is a late-night radio host who takes calls about listeners’ personal problems. But in listening to the stories it forces him to consider where his own life is going.

“There’s a kind of optimism in the story; regret and alienation are still themes but in the end there is an offer of redemption – the conclusion is that personal choice exists.”

In throwing down the gauntlet to become a cup-half-full person within a decade, Watson admits he is trying to purge himself of his own pessimism, but without resorting to exploitative “pseudo-scientific twaddle”.

“I feel pretty cynical about the self-help industry,” he says. “I hate the way it can make quite vulnerable people believe that reading a book or spending X amount of money on a product will transform their life.

“It borders on exploitation,” he continues. “It’s a multi-million pound industry and a lot of people are getting sucked in by companies pedaling pseudo-scientific twaddle. Are we able to change our fundamental outlook?

“It’s a nice idea but you can’t literally get whatever you want in life by using visualisation techniques, no matter how hard you try.”  But the challenge of purging negative beliefs still holds a strong appeal.

“I know myself that chronic pessimism closes doors; negativity in a sense becomes self-fulfilling.” So how optimistic is he about conquering his own five challenges? “Oh, I’ve already completed one of them,” he laughs.

“I played drums for some of my mates. But I want to do it for a big-name band in a massive stadium with loads of pyrotechnics and the world’s media ready to watch my amazing drum fills – now that would be a challenge.”
(First published in The Big Issue in October 2010)