Ask Shaun Williamson what he remembers of his 10 year stint playing one of soap land’s most infamously hapless tragi-comic characters in Eastenders bumbling Barry Evans, and the memories of his early career as a Pontins bluecoat aren’t far away. You see, Williamson, who’s soon to star in a Take That musical, never forgets where he’s coming from.

The 43-year-old Kent actor, singer turned stand-up has by own his admission, had a
circuitous route to fame.   “It’s true most people first saw me in Eastenders and they might see me doing musicals as some huge departure,” he considers. “But looking back now, it’s how everything started for me. I’m closer now to doing what I did when my career began than I have at any stage previously. Weird, isn’t it?” 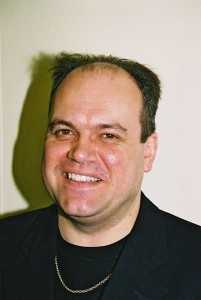 Maybe, but some might say Williamson was born to belt out the hits. Kicking off at the Rhyl Pavilion this week, he will play Ron Freeman, the manager of a Take That tribute act in the show Never Forget The Musical.

Williamson’s character is determined for the five lads filling Gary Barlow, Robbie Williams
and co’s shoes to win the competition and save him from financial ruin. “He’s a nice guy in a cruel industry,” he explains. “Ron isn’t a shyster, he’s not frightened to tread on a few toes to get what he wants. He’s desperate to succeed and needs to win the show’s £10,000 prize.”

Williamson is an unabashed Take That fan: “I love the ballads, Barlow writes a great
ballad,” he says with the sincerity of an over sentimental uncle. “I love ‘A Million Love Songs’ and ‘Back For Good’, such classic tunes.” You get the impression that for Williamson, singing has been a catharsis from the shackles of bungling Barry.

“The weird thing is that even now I still, still get people coming up to me in the street asking if Barry is coming back to Walford,” he says. “I mean, he’s dead,” he says of the character who met a sticky end in 2004 at the hands of super-bitch Janine Butcher on a Scottish mountainside.

“If he is coming back it will be in a white sheet. The writers would have to come up with a Harold Bishop-style scenario,” he continues. “There is no going back now, he didn’t fall into Walford Canal and disappear.”

Barry Evans was written out of Eastenders in late 2003 amid rumours Williamson quit over being denied time off to appear in panto. He’s since gone on to work with Extras main man Ricky Gervais, famously sending up his previous incarnation – this time as an unemployable actor called Barry Evans.

“I’d never met Ricky [Gervais] before but one day I got a call from him. I just thought, wow. It turns out he was a big fan of Barry, so we gave him one final send-off.”

“It was incredibly important to put Eastenders behind me,” he adds. “I owe it to the show that I had the chance to find other work but it was definitely time to move on. I wouldn’t rule out going back to soaps, but only on the proviso I played a completely unhinged nutcase villain.”

“I wouldn’t want to do another Barry type character, what would be the point? I would love
to play a bad guy and go out in a shoot ‘em up blaze of glory.”

Despite the post-Extras career, Williamson is taking nothing for granted. “I was totally undisciplined when I started my career,” he says of his 20s. “I used to drink far too much and the Pontins gig was going absolutely nowhere.

“I ended up leaving to stack shelves in Safeway, a real low point personally. I had no
drive whatsoever and drifted and drank my way through life. It wasn’t until I tried straight acting that I thought maybe this could lead somewhere,” he says.

“I suppose having determination is a lesson I’ve never quite forgotten,” he adds. “I’ve
still got one eye on playing Robbie Williams.”

First published in The Big Issue in August 2009