Four years on from Eel’s immense 32-track double album, Blinking Lights and Other Revelations, the writer was scratching his stubbly chin for inspiration. “I started writing songs in a particular frame of mind and nothing really seemed to fit,” he explains. 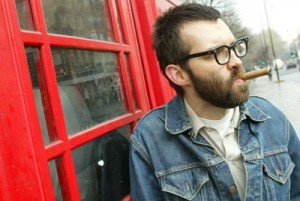 “Then I woke up one morning and I looked at my giant beard in the mirror and I thought, ‘Why don’t I write songs that suit my beard?’ It takes a lot of dedication and determination to grow a good beard.” Measuring E’s beard prowess against Eels’ latest record, Hombre Lobo, it’s hard not to see both as a triumph.

Hombre Lobo (Spanish for werewolf) pitches E as a “dignified old werewolf character” exploring the inner workings of humankind’s desires. “The album looks at animalistic desire and how technically we are all animals,” he adds. “It describes a werewolf character at the mercy of his emotions.”

Despite the pretence that E is “writing from a different place”, the autobiographical nature of his new songs are obvious. “I was describing the album to a close friend as 12 songs about a 40-year-old werewolf character,” E explains, and she says ‘Oh, so
you’re writing about yourself again.’”

Despite the album’s downbeat moments, there is a personal epiphany in album highlight ‘My Timing Is Off’ as it assures us: “Believe it or not we don’t have a choice in matters of the heart/just gotta be brave enough to love and let yourself be loved.” Always a nakedly-honest songwriter, E’s ability to sculpt personal tragedy into music is legendary.

The son of physicist Hugh Everett III, originator of the many worlds interpretation of quantum theory, and Nancy Gore, Mark Oliver Everett was born in Virginia in 1963. He developed a fascination with music from a young age. But family tragedy cast a shadow over his formative years.

Aged 19, he found his alcohol-troubled father dead from a heart attack. In 1996, when Eels’ debut album, Beautiful Freak, established the band as serious contenders, E’s sister committed suicide after a long battle with schizophrenia. Two years later his mum died of lung cancer.

“The act of writing personal songs is a cathartic thing for me,” he says. “I find I’m the type of personality who just goes crazy if I’m not doing something associated with music. I’m quite an unstable person, I need the music to keep me going – I don’t function without it.”

After writing a book about his life, Things The Grandchildren Should Know, and contributing to a BBC Four documentary about his father’s scientific discoveries, E says the experiences left him “painfully stuck in the past.”

He adds: “The great thing about Hombre Lobo is I’m finally back to the future and living in the present. For the sake of my sanity I had to.”

A long-time resident of Los Angeles, E says Hollywood’s cosmetic glamour holds little interest. “My house is in LA but I’m cocooned in it. People have this cosmetic, pristine view of what it is; some of the people downtown are like that, but not all. Mostly, I’m just there to scare the kids with my enormous beard,” he adds with a menacing chuckle.

Article first published in The Big Issue in June 2009.