The barren desert plains of Patagonia are still scarred today by irrigation channels dug by the first Welsh colonists who settled here in the 1860s. In the remote and unforgiving hinterland of this southern Argentine region – a territory nearly 40 times larger than Wales – Welsh families emigrated in a treacherous journey across the Atlantic in search of the freedoms denied to them in their homeland. 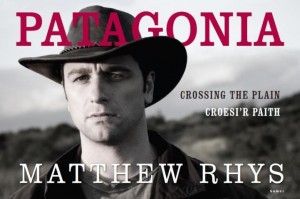 The irrigation channels survive today as one of the few visible reminders of the determination and sacrifices made by the first Welsh colonists. The ditches they dug symbolise the toil they endured to carve out a piece of history and make a corner of South America forever Wales.

Their remarkable but often neglected story is the focus of Welsh actor Matthew Rhys’ new book, Patagonia: Crossing The Plain/Croesi’r Paith.  Rhys’ work contains his own photographs and journal accounts of his 700km journey on horseback across Patagonia in 2005 with 30 of the direct ancestors of the original Welsh settlers. Their journey marked the 125th year of the original Welsh expedition.

The story of Wales’ links with Patagonia is now undergoing a revival. Hot on the heels of Super Furry Animals frontman Gruff Rhys’ documentary about his own ancestral heritage in Argentina, Seperado, Rhys’ book compliments his new film, the Marc Evans-directed Patagonia, which also stars Nia Roberts and Duffy.

The Cardiff-born actor says his motivations for documenting Wales’ ancestral links in Patagonia were straightforward.”It’s a neglected aspect of Welsh ancestral history and
deserves our respect; the Welsh men and women who went there did so in the hope of finding a better life.”

Welsh culture and traditions were under increasing attack in Britain in the mid 19th century. In an attempt to hold back a rising tide of religious persecution, autocratic landownership issues and the continuing political erosion of the Welsh language, the decision was finally made by some to leave.

On May 28th 1865, 150 men, women and children set sail from Liverpool on board the Mimosa for Argentina. They would never return. Promised a “Welsh utopia” on arrival, when the settlers reached Rawson on July 25th 1865, they instead found a desolate expanse barely able to support life.

It took 20 years of back-breaking labour for the land to be cultivated. As the Welsh colonists fended off starvation and disease, they were assisted by the Patagonian native American tribe, the Tehuelches.

The Tehuelches told the Welsh settlers about fertile land that lay to the west.  Desperate to survive, a party of 29 men comprising seven Argentines, two Germans, 20 Welsh volunteers and “a few hundred horses”, were led by John Murray Thomas, Luis Jorge Fontana (the governor of Chubut), Antonio Miguens and John Daniel Evans.

They set off on October 19th 1885 to make the 700km westward. Five and a half tortuous weeks later they reached the foothills of the Andes and established the town of Trevelin – Welsh for mill town- in a place they would christen Cwm Hyfryd – the Beautiful Valley – because it reminded the Welshmen of their homeland. Armed with Remington rifles, the men became known as Los Rifleros del Chubut – the riflemen of Chubut.

Rhys followed in the footsteps of the original Los Rifleros on his 2005 trip. “Wales isn’t really known for having a strong tradition of pioneers,” he explains, “but if you read the
diaries of John Daniel Evans then you realise why the men felt they had to make such a dangerous journey.

“There was a desperate lack of fertile land, the original community wouldn’t have survived if the expedition had not gone ahead,” he continues. “Their journey must have felt like space travel did to us in the 1960s; you can only imagine the utter fear they felt going into this vast, unforgiving space not knowing if they would return.”

Rhys admits he felt anxious before his journey began. Aside from being fairly inexperienced on horseback, he spoke very little Spanish and was worried about becoming isolated from the group. “There was a definite feeling of trepidation, I was very aware the people on this trip were all related to the original explorers.

“I was the outsider, the famous actor, but I didn’t want that status to get in the way of this respectful thing they were doing,” he adds. “I was determined the account would be told from the sidelines, I didn’t want to be part of the story.”

Travelling up to 65km a day on horseback, Rhys says his most difficult moments came in the first four days when he felt “agonising pain” from being in the saddle 12 hours a day.

“It was absolute murder,” he recalls, “I didn’t know if I could continue. The thought of how far we had to go was constantly on my mind. I was in limbo because I couldn’t think about
backing out after only a few days, but I couldn’t see how I could keep this up for a month.

“I felt a certain bloody mindedness about continuing, I was too embarrassed to quit. I kept telling myself I couldn’t quit around these guys; I wanted to be able to tell their story.”

Rhys’ preparation for the trip included taking a class in documentary photography, learning basic Spanish and improving his knowledge of horse riding. He describes the time he spent practicing his camerawork as “invaluable, I couldn’t have made the book without it.”

The quality of the book’s black and white photography proves his preparation time was well spent. Monochrome deserts, imposing valleys and images of his friends dressed in frontiersman’s clothes are among the highlights.

In a particularly poignant passage, Rhys writes about how one of the expedition team, a 70-year-old man named Vincent, was forced into abandoning his trip after three days because he felt unable to continue. “Vincent’s story was especially sad, like all of the guys
on the trip it was a lifetime ambition to do this,” he explains. “He later told me how he cried all the way home.”

Sharing company with the descendents of Los Rifleros for many weeks meant Rhys could learn more about how a permanent Welsh settlement was founded in Patagonia. Strewn across Patagonia’s vast expanses today are Welsh chapels and pockets of Welsh-speaking communities.

Rhys, whose first language is Welsh, says meeting the people in these isolated outposts 7,500 miles away from Wales allowed him to experience “the pride and affinity they feel towards Wales and Welshness, despite the fact the vast majority of them have never been there.

“In their language and traditions they are Welsh, it felt really strange to be around this so far from home,” he explains. “The thing you realise is this community exists because of the determination of their ancestors – it was their vision that allowed this to happen.”

The 2005 expeditionary team reached Trevelin a month after they set off. Rhys says he felt “a huge calmness” on arriving, writing in his journal that he’d “never felt contentment like it before or since.”

He now hopes his book will help bring the story of Patagonia to a fresh audience. “My aim is to get the story out there, it isn’t spoken about enough. My goal is to make sure more people know what happened here and why.

“You get the feeling a lot of what Los Rifleros did was an act of selflessness,” he continues. “Personal glory didn’t come into it and there was certainly no guarantee of success – it could have all ended in tragedy. But they went out there to make a better life for their families; they couldn’t have known what they would find.”

(First published in The Big Issue in November 2010)