Graffiti daubed on a moss-covered tumbledown wall on the winding A487 coastal road to Llanrhystud in Ceredigion is the only reminder left for passers-by of an event that fuelled one of the biggest campaigns for Welsh independence in living memory.

The fading words “Cofiwch Dryweryn” (Remember Tryweryn) are the unofficial memorial to the Welsh-speaking people of Capel Celyn in Gwynedd, who lost their homes when the Tryweryn Valley was flooded in 1965 to build a giant reservoir to supply the city of Liverpool with water. 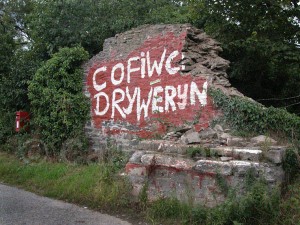 But these two words and all they’ve come to represent are in danger. Forty-four years on, what remains of the community who fought tooth and nail for Capel Celyn face another big battle – to save the memory of 1965 before it too is lost.

The graffiti, which was painted by Welsh language author Meic Stephens in the early 1960s, is fast deteriorating. Unless urgent repairs are made, this poignant piece of history will disappear. But saving it and erecting a permanent memorial will cost £80,000.

Welsh Liberal Democrat councillor, Rowland Rees Evans, explains: “The Tryweryn wall is a key landmark and we are aware there is considerable support across Wales and beyond to ensure its future. It has national significance to the contemporary political life of Wales.”

The historic monuments agency Cadw has pledged £30,000 to the appeal to save the Tryweryn memorial, but unless a further £50,000 is found, local residents fear the sacrifices of October 1965 will have been in vain.

Forcibly removed from land that had been owned by families there for centuries, the bitter nine-year long struggle to save Capel Celyn ended on October 21 1965 when the valley was flooded to create the Llyn Celyn reservoir for the city of Liverpool.

More than 800 acres of land were flooded and 68 people lost their homes when a private bill sponsored by Liverpool City Council to drown the valley was passed through Parliament by Harold Macmillan’s government. The event was a turning point in modern Welsh political history and has continued to fuel fierce debate about Welsh independence.

For nearby Bala resident Dei Charles, who was a school leaver from near Capel Celyn when it was flooded, the campaign for a memorial must not fail: “An entire community was lost virtually overnight. It’s very important nobody forgets the sacrifices made.”

Mr Charles, who is now an area officer for Farmers’ Union Wales, vividly remembers the devastation caused: “I knew many people who lost their homes and were forced to move,” he says. “If you think about the effect that would have to be shunted out of the house you’ve lived in your whole life, many people just couldn’t cope.

“It was this event that led to a resurgence in Welsh nationalism because ultimately, that community was wiped off the face of the earth to be used as a water supply for an English city.

“The bottom line,” adds Mr Charles, “is the reservoir is of far greater use to the people of Liverpool than it is to people here. It’s important for future generations to realise what happened here in 1965. I think it should serve as a warning to them to look after their own communities.

“It’s too easy for people from the outside to come to this place, look at what was here, and say the land was worthless. But for the people who lived here it was priceless and it was taken mercilessly away from them before their eyes.”

Cadw has pledged full support to protect the memory of Capel Celyn, but finding a further £50,000 is a big obstacle. Ruth Meadows, head of heritage communications at Cadw, explains: “If the appeal reaches its target, the National Trust will take on the wall and as well as the conservation, provide the story of its significance.”

Funds raised will help buy the surrounding land, maintain the aging wall and cover all maintenance costs. The agency says it will continue to pump money into schools to promote the history of Capel Celyn, but local residents fear the memory of their sacrifice is doomed to be forgotten.

Plaid Cymru councillor Elwyn Edwards was just 13 when he joined the protests to save Capel Celyn. He remembers his childhood playing in rolling fields near his home with friends, only to see the village he loved destroyed to make way for a giant reservoir.

“It’s very important that the issue is kept fresh in people’s minds,” he says. “It is an issue of English, not British, but English cultural imperialism and it’s still going on now.

“The water that is being taken from this reservoir to be used by businesses in Liverpool is making millions of pounds in profits. It’s certainly not benefiting the people who live here.

“The drowning of that valley changed the cultural and political landscape of Wales forever. It changed the mindset from one of passive acceptance to self determination. Wales has never been the same again.”

The tides of public anger over the drowning of Capel Celyn rose again in 2005 when Liverpool City Council issued an apology for its actions. “We realise the hurt of 40 years ago when the Tryweryn Valley was transformed into a reservoir,” the statement read. “For our insensitivity we apologise and hope the historic and sound relationship between Liverpool and Wales can be completely restored.”

But many Bala residents rejected the sentiments. For Dei Charles, the apology was simply, “too little too late. My stance hasn’t changed [since 2005]. Liverpool’s apology is empty words 40 years after the event. It’s a hollow sentiment and mustn’t detract from what happened.”

Bitter opposition from Welsh MPs in the 1960s failed to stop Liverpool from using the Tryweryn Valley as its personal water supply. A total of 35 out of 36 Welsh MPs voted against legislation to make the land a compulsory purchase order, while a remaining MP abstained from voting.

Bessie Braddock, Labour MP for Liverpool at the time, became a hate figure for many people in Wales after she dismissed the plight of Capel Celyn as something that would, “make some disturbance of the inhabitants inevitable…but that is progress.” The lost village is inextricably linked with Welsh independence.

“We wanted to remind the people of Wales of the treachery and suffering,” explained Meic Stephens when asked why he wrote the graffiti. “The anger, the agony and disruption that took place when Liverpool Corporation were given the go ahead – against public opinion in Wales – to drown Tryweryn.

“We wanted to warn our fellow Welshmen to be vigilant and make sure that this would never happen again.”

Wales may have changed massively since the days when an English city had the right to flood a Welsh valley, but for a generation that still remembers, if Tryweryn is forgotten then communities in Wales will always be in danger.

The campaign to Remember Tryweryn is changing from a political issue to a conservational one, but the warning for future generations is clear.

“Water is a very precious commodity,” explains Mr Edwards. “It’s getting more precious all the time. Sooner or later that water will turn to gold for somebody. Wales has a lot of valleys and a lot of water, it needs to be protected or the lessons of the past will be forgotten.”

First published in The Big Issue in August 2009.