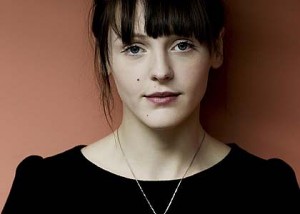 Blame it on the exuberance of youth, but Laura Marling’s gig at London’s Soho Revue Bar earlier this month effortlessly distinguished the beguiling folk singer from the egomaniacs of London’s indie scene.

The 17-year-old Reading-born devotee of American folk rock was faced with an embarrassing last-minute cancellation because of her age, but determined not to disappoint, there was no diva-esque tantrum. She played an assured set in the street to a mesmerised crowd huddled outside two sex shops. It’s not the first time the “Berkshire Joni Mitchell” has surprised her fans.

Gigwise meets Marling in a Hammersmith cafe to chat about her latest EP ‘My Manic & I’,
and finding her feet in an industry intent on making her the latest UK female artist with a penchant for acerbic songs about boys. Dressed in a vintage red Mickey Mouse jumper and black overcoat, she peers beyond her blonde fringe to tell Gigwise of her Soho Revue gig: “We’d been somewhere really far north the night before and we were ****ing tired. At eight o’clock my manager came into my dressing room and said you don’t have any ID, you can’t play. I burst into tears and then my band came in, we decided to play outside. It’s unbelievable what rage can do.”

Marling, who’s been balancing a recent solo tour with The Maccabees with commitments to folk rock quintet Noah and The Whale, has built steady acclaim since releasing her debut EP ‘London Town’ in April. Not that she’d know; she claims to have no idea what’s said about her, cocooned in a tiny London flat full of dusty books: “I don’t have a TV or radio and I never buy newspapers because I’m too lazy,” she explains. “And I don’t read any music magazines, apart from Uncut.” Gigwise predicts Marling won’t stay in the dark for much longer.

Marling grew up in Reading but now lives in London. Citing Bob Dylan and Joni Mitchell as among her first influences, “Every reason people start writing music is Joni and Dylan” she quips, she began gigging at 16 for Way Out West, before finding her own gigs with likeminded artists. She says her only musical background comes from her guitar-playing dad, and lists ‘Heartbreaker’ era Ryan Adams, Bonnie Prince Billy, Diana Cluck and Jeffrey Lewis among her current influences. “They just give me a reason to live,” she says with an earnestness she only matches on record.

Now signed to Virgin, her two EPs showcase a precocious talent wrapping aching lyrical honesty in three-minute brooding folk rock awash with stark violins, pianos and Marling’s trademark agile vocals. First-time listeners of the lovelorn ‘Night Terror’ and lilting balladry of ‘My Manic & I’s lead song ‘New Romantic’ may sense a familiarity with her work; the songstress made a guest appearance on The Rakes’ ‘Suspicious Eyes’ from ‘Ten New Messages’ earlier this year. The song, a paranoid post 7/7 tale of prejudice among underground commuters, features Marling deceptively cooing, “A young Asian guy with a rucksack on his back jumps on The Tube/ is he ready to attack.” It’s a highlight from one of
the year’s best albums, and came about after Rakes singer Alan Donohoe got in touch.

“Alan MySpaced me, I said yes. I went to the studio and 20 minutes later it was done,” she
explains. The collaboration gave Marling more exposure before her first release, the well-received ‘London Town’ EP. But Marling seems to dismiss old songs in favour of material she plans to record. “Well, ‘London Town’, that was really to get rid of those songs,” she says. “It sounds harsh but those songs weren’t going anywhere. I really wanted to lose the whole London scene thing, and also to an extent the ‘New Romantic’ thing.”

The latter, which name checks alt-country hero Ryan Adams, is a classic girl meets
boy relationship woe story featuring the lines: “My mind has ****ed me up
more times than any man could ever know.” Marling adds almost apologetically: “It is
just one song and I haven’t written any other songs like that. And I never want
to. It’s to show that I don’t just sing about Ryan Adams and things like
that.” But given its success – 15,000 hits on YouTube and counting – does
she feel awkward singing from the heart?

“I do put up certain barriers otherwise it would be too weird,” she considers. “I don’t
write too personally, being an idiotic youth. I wrote ‘New Romantic’ when I was very young indeed,” she says. Marling sounds nothing like Kate Nash, Lily Allen, Amy MacDonald et al, but is regularly lumped in with these artists. Although not irked by the comparisons,
she’s unsure why they’re made: “Yeah, that whole Camden thing, it’s just not really what I’m about. I’m not into Kate Nash and Lily Allen, I never have been, it’s just bizarre,” she says, before giving Gigwise a defiant look: “Has anybody ever listened to mine and Kate Nash’s music next to each other?” Marling is wary of cliques too: “I absolutely hate being tagged into this London thing, I just live here. I get tagged into the whole girl thing, which
is just painful, but then if you get into the genre you want that’s painfully
cool, to other people it’s painfully sad that you think it’s cool. So there’s just no point.”

Despite claiming ignorance of her plaudits, Marling knows how fickle the industry can be.
“There’s a massive part of me that doesn’t want too much success,” she considers. “But then there’s a small part of me that says, well you have to be successful in order to live. But it’s completely outweighed by the massive part of me that just doesn’t want huge success because it will ruin you.” The next year could prove interesting. “In England, if you have huge success on your first album, you’re ruined,” she says. “Nobody gives you a second chance and nobody wants to hear anything different. You play what you used to play.” That won’t come easy to a singer that thrives on never doing the same thing twice.

Yet for all of ‘New Romantic’s sincerity, it’s something of a musical red herring. “I don’t know what it is, but I can’t understand why people have picked up on that song,” she says. “There are loads of things people can relate to in a song and to me that’s not a great song, it’s a pop song. But if it leads people on to listening to the rest of my music, that’s great.” Marling has been recording tracks with her producer and Noah and The Whale band mate
Charlie Fink, with the aim of releasing an album next year.

She’s coy about how it will sound; save it will be different from anything she’s done before.
“It’s quite contemporary, but keeping the old folky bits in their too,” she says. “It’s all been fine, it’s all an experiment, but we’ll see how it works.” From what Gigwise knows, the album promises to be immensely heart warming, enigmatic and utterly unpredictable. Maybe just a little like its creator, who probably won’t be reading this.

(First published on Gigwise.com in October 2007)