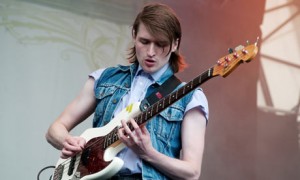 It’s not easy to get the British music press to agree on anything, so the mountainous levels of praise that have been heaped on Lake District indie rock band Wild Beasts’ second album, ‘Two Dancers’, has been all the more breathtaking.

In an industry where everything seems to be hyped as the next big thing, Wild Beasts are going about things in their own idiosyncratic way. A growing live reputation and frontman Hayden Thorpe’s “soaring falsetto” (see music press everywhere) has helped the group live up to their billing as serious contenders.

Sounding like a mixture of Kate Bush in her pomp with Antony & The Johnsons stylings and Nick Cave’s brooding lyrics, to hear Wild Beasts live is to understand why they might just go the distance.

Citing the band’s set at this year’s Latitude Festival as the year’s highlight so far, where they were sandwiched between Thom Yorke and Nick Cave, Thorpe says the Kendal quartet has been taken aback at the praise heaped on their young shoulders.

“We wrote these songs in each other’s bedrooms, we couldn’t even be sure if they’d ever have seen the light of day,” he says. “To have them sung back to you every night is just the weirdest feeling.”

The band, which has been based in Leeds for the last five years, rightly say they’re proud of ‘Two Dancers’ but feel there’s a lot more to come. “We constantly have our radar on and nothing can be dismissed musically.”

Thorpe’s elliptical lyrics sometimes mask his meaning, but he says the band’s mission is clear: “it’s about the joy of us playing together and still acknowledging there are ugly things out there in the world. I think it’s an optimistic sounding record that’s come from quite a dark place.”

Tales of small town violence are to the fore on the group’s single ‘Hooting & Howling’, which was inspired by Thorpe’s teenage years in the menacing pubs around Kendal. “The song sort of reflects the inability of a lot of teenagers and young men to interpret love,” he
explains. “So that passion is repackaged as aggression. The song tries to unravel that complexity – I love this person and I want to be with them but in order to protect them I have to beat the hell out of any opposition.”

Fisticuffs aside, little could prepare the band for its last visit to Wales. “My God, it was biblical,” Thorpe remembers of the 2008 Green Man Festival’s torrential downpour. “We drove down from Leeds and it was touch and go whether we’d make it. It was like a tropical cyclone had just happened.”

A different kind of storm is expected at Wild Beasts’ Swn Festival set next week. “We definitely want to recreate people’s favourite moments from the record live, but we want to twist the knife a bit and do something different,” he says. “I hope we’re in a situation where we can throw whatever we want at the audience and they’ll still keep coming back for more.”

(First published in The Big Issue in October 2009)