How many more must die?

For many people, Julie Richardson never had a name, much less a life story to put to it. So when the 42-year-old homeless woman’s body was found in broad daylight on a Swansea street last month, for some it had no greater significance than being the inevitable consequence of a life ravaged by alcoholism, drugs, and homelessness.

Julie is the fourth homeless person to die on the street in Swansea in little over six months. Her death, which is now being investigated by the police, has sparked calls to improve provisions for homeless people in the city. It’s also ignited an intense debate among city residents about how someone could be left to die in public. 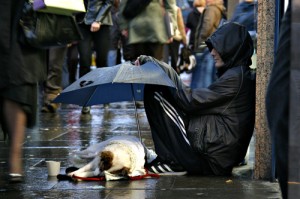 Julie’s body was found by a passer-by slumped on steps at Bethesda Street, just yards from Swansea High Street, on the afternoon of Thursday May 29. Metres from where she was found are a charity-supported karate centre and a building called The Friendship Centre.

But for Julie, who was well known among Swansea’s homeless community, there was no charity of friendship at hand on the afternoon she died. The street, while not a busy thoroughfare, has regular passers-by on weekday afternoons.

It’s believed Julie, who had been homeless for around eight years, had been there many hours before a member of the public tried to revive her. By the time the police and ambulance services arrived it was too late.

Her death has caused mixed reactions in the city, ranging from sympathy that a vulnerable woman was left to die in the street, to anger about a perceived lack of provisions for homeless people in Swansea. Others claim her “lifestyle”, and by extension, her death, were ultimately “her choice.”

“Julie was seen as a survivor,” says Sean Stillman, a Christian Minister who founded the Zac’s Place community project in central Swansea. “The fact she’s gone has hit home. It will have shocked a few [of her friends] on the basis if it happened to her it could easily be them.”

It’s no secret Julie lived a chaotic life blighted by alcohol and drugs. She could be hostile to those trying to help her, and like many alcoholics, her personality had two sides.

Two weeks before she died she was fined in court for making racially aggravated remarks to shop workers in the city centre. But this was the same woman who’d recently s struck up a friendship with a Pakistani man.

Julie’s friends describe a troubled but sympathetic character who always had time for others. “If she’d had a drink there would always be a few  choice words,” explains Jan Collard, vendor services manager at The Big Issue Cymru’s Swansea office and friend of Julie. “But you could always talk to her. She genuinely cared for others.”

Julie’s decline is similar to that experienced by many who end up on the streets in Wales. A family break up and the death of her baby daughter aggravated her addictions and she was left roofless.

“Julie’s life was tragic. She had a drink problem and lost her baby,” Collard continues. “A lot of people don’t see the story behind every person, they see the problem and not the person.”

Julie was a regular at Zac’s Place, which was founded in 1998 by Stillwell as a place for the socially excluded. When we visit, The Big Issue Cymru finds a bustling community where self-styled ragamuffins can grab a bite to eat and chat. It’s one of the few places in the city that accepts everyone. There’s been keen debate here too about Julie’s death and the public reaction to it.

“There’s a common thread in a lot of the stories of the people here,” Stillwell says. “There’s bereavement, there are sad love stories, and there’s sexual abuse. More often than not, it’s one of those three things that leads to someone becoming homeless.”

Glenn Stewart, a friend of Julie’s and volunteer at Zac’s Place, adds: “The public perception is people make their choices and that’s why they’re there. But a couple of wrong turns and that could be you or me. There needs to be a bit of grace and for something to be done otherwise people will be left to rot.”

“There’s a fear of approaching people who are on the streets and in trouble,” Collard adds. “I don’t think anybody need feel ashamed for walking past Julie if they don’t know what to do. But if you see someone in the state she was in and you’re unsure, phone an ambulance. Somebody with medical knowledge can make the decision whether they need to go to hospital.”

Sadly, Julie’s death is not an isolated case in Swansea. Martin Woodley, 37, died on the steps of Brunswick Methodist Church on January 27; his body was discovered by churchgoers on their way to Sunday service.

Martin’s death followed that of 40-year-old Kevin O’Donaghue, who died of pneumonia in a bus shelter on Swansea’s the Kingsway on a bitterly cold November night.

A Fourth long-term homeless man, Peter Thomas, died in the autumn. He was not registered as a street death because his deteriorating health, caused by years of sleeping outside, meant his estranged family took him in on the night he died.

“After Kevin died there was a certain inevitability this would happen again,” Collard says. “In church at Kevin’s funeral there was a row of homeless people at the back. All I could see was this happening again.”

Both Collard and Stillman feel further street deaths are inevitable unless a permanent night shelter is reopened in the city. Following the closure of the city’s night shelter in 2003, there have been growing calls for more beds. “A shelter isn’t just about having a bed,” Stillman explains. “It’s about having someone there to watch over you.”

Stillman’s comments are backed by Conrad Watkins, director of Cyrenians Cymru, the Swansea-based charity for the socially disadvantaged. “We have one emergency bed in a laundry room for a city of 220,000 people,” he says. “I cannot think of another city with such low resources for people at the sharp end of poverty.”

Watkins says Swansea City Council must lobby the Welsh Assembly Government for more funding to tackle homelessness. He says it’s inexplicable that government schemes such as Places of Change, which have been successful in finding secure housing for homeless people in England and Scotland, aren’t being implemented in Wales.

“Millions of pounds are being pumped into tackling homelessness through Places of Change, but the scheme hasn’t come to Wales,” Watkins says. “What is the rationale behind that when people are dying in the street?”

Swansea City Council has offered its condolences to Julie’s family, but the city’s leader Chris Holley has described Swansea’s homelessness services as “adequate”. He also claims the number of homeless people has not increased in the last two years.

Stillman’s response is unequivocal: “There are four less now because Martin, Peter, Kevin and Julie have died.”

There is a further twist in the tale for Julie, though. The circumstances of her death are made more tragic because there were signs she was taking control of her life again. On the afternoon before she died a bed was found for her – an important first step towards finding a permanent place.

She agreed that enough was enough, and that it was time for her to take radical steps to change her situation. “We were singing in the car going through town,” Collard remembers. “That song by R.E.M came on the radio, ‘Everybody Hurts’. The song says you have to ‘hold on’; I said this is your song, Julie. She was holding on at that point for something better, for a way out. She was so positive.” But less than 24 hours later she was dead.

Now Collard is warning of further deaths unless the city’s homelessness provisions improve. “Having a permanent night shelter isn’t the be all and end all, but it would certainly make a difference. We can’t keep losing people this way. They are not statistics; they are people on the street who need our care.”

Julie died in wretched poverty, her passing only made more desperate by the glimmer of hope she was turning her life around. Hers is deemed the fate of those without hope – the ones denied our attention as we hurriedly walk by. If nothing else, Julie’s death might push us to ask ourselves when we’ll find the compassion to look them in the eye, and maybe even do something to help.

First published in The Big Issue in June 2008