Standing on the corner of Swansea’s famously feisty Wind Street is a gang of 50 lads with fixed glares. Spilling out from the pub onto the street with pint glasses in hand, they exchange awkward smirks that mask a barely contained glee that so many mounted police mark their every move.

They wear football shirts, overcoats and baseball caps and sport skinheads – they are the face of Britain’s resurgent fascist culture. Its vitriol has already spilled out onto the streets of Manchester, Luton and Birmingham this year. 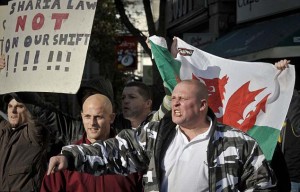 They call themselves the Welsh Defence League; a newly-formed wing of the English Defence League – the self-appointed defenders of Britain’s fight agains “the Islamification of Britain”. The EDL has already brought fear and violence to several English cities. Now it’s Wales’ turn.

In the eyes of the EDL, Britain faces mortal peril from Muslim extremists. The organisation, which strongly denies having racial motives, says it’s been “forced to rise up” in response to the government’s failure to contain militant Islamism.

A chaotic internet-spawned ragbag of an alliance, the EDL claims thousands of members nationwide. Some are drawn from football firms, others from the BNP and other far right groups. Many are just angry and disaffected young white males looking for answers and someone to blame.

In the words of the EDL’s spokesman Trevor Kelman: “Until our government  gets their snouts out of the trough and does something to stop them we will continue to grow and demonstrate against Islamic fundamentalists who despise our way of life.”

What ultimate lengths the EDL will go to nobody yet knows.

Holding banners aloft proclaiming “patriotism isn’t racism”, “Cymru Taliban hunters” and “Sharia law not on our shift”, Welsh Defence League supporters make Nazi salutes towards the demonstrators and taunt them by burning the anti-Nazi flag that dangles above the window of The Sheep Shop.

Activists from labour unions, universities, religious groups and anti fascist organisations beat back with intense drumming, whistles and reverberating chants of “black and white unite and fight, stop the BNP”. Their calls growing more fervent as the autumn afternoon sun wears on.

Held back by police officers, a human wall clad in high visibility jackets is the only obstacle keeping two seething throngs from boiling over. 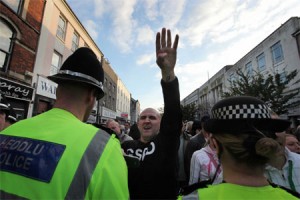 Around 200 supporters from multiethnic and multi faith groups have commandeered Castle Square Gardens to preempt a takeover by the WDL, who are outnumbered around four to one.

The target for the WDL’s vitriol is Swansea’s Muslim community. Under the thin veneer they exist to defend Britain from Muslim extremists, the EDL’s leadership denies having any beef with ordinary British Muslims.

Speaking at the rally, Plaid Cymru Assembly Member Leanne Wood tells demonstrators their presence is a continuation of Wales’ valiant history of fighting oppression. “My ancestors in the Rhondda sent [Oswald] Mosley’s Blackshirts packing when they tried to march on the streets of Tonypandy,” she says over swathes of cheers.

“My ancestors in the Rhondda, just like many of yours here, went to fight fascism in Franco’s Spain. We’ve got a proud tradition and history standing here today in this square; a continuation of that history is what we call on again today.”

Wood’s comments are echoed by Huw Lewis, Labour AM and First Minister leadership contender, who calls the afternoon a “great day to fight fascism”. He says the WDL has “brought shame on Swansea for neglecting the sacrifices made in WWII [so] shame on you for bringing shame on us.”

For Ian Titherington, chairman of Wales’ anti-fascist group Searchlight Cymru, the WDL’s presence only confirms their core support is “fascist hooligans.” The only way they can gain publicity is by having a punch up, they have no message and nothing positive to say,” he says.

“They should be called the English Offensive League; I frankly find them very offensive. If they come back to Wales they won’t get a fight, they will get an exit door
because that’s all they deserve.”

Alec Thraves, Welsh secretary for the socialist party, tells The Big Issue Cymru the aggressive actions of the WDL are “quite clearly an anti Muslim agenda. They’re openly racist in what they say. They claim to have nothing to do with the BNP but from their demonstrations we can see their fascist salutes.

“They are targeting disaffected young lads who are searching for answers in life and I think it can have an impact [on them],” he says with a heavy sigh. “We are campaigning with the other unions to offer an alternative to these young lads who feel they have to resort to these extremist tactics.”

At 3.30pm when the WDL edge towards Swansea’s 12th century castle, demonstrators surge up the steps in Castle Square Gardens to be met by a police cordon.

Old school punks stand cheek by jowl with Swansea students, church groups and union organisers. Some sit atop telephone boxes and in the branches of trees as raucous chants of “Nazi scum off our streets” reach a throaty crescendo.

For the demonstrators, the city of Swansea has once again beat back racism’s ugly tide. How high it will rise we’re only beginning to realise.

Article first published in The Big Issue in October 2009.