“Cymru All You Faithful”

Even by the standards of Wales’ most wildly inventive and unpredictable bands, Cardiff’s psychedelic pop heroes Super Furry Animals are on a creative roll.

The band that the music press earmarks the word “eccentric” for every time they release an album are back with their strongest record in years, the technicolour opus Dark
Days/Light Years.

The quintet’s frontman Gruff Rhys is calling it the “most accurate representation” of their
personalities so far. The rest of the indie music world is heralding it as a big return to form after the critically applauded but downbeat predecessors Hey Venus! and Love Kraft. 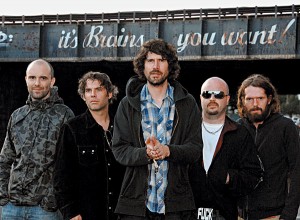 Truth be told, Dark Days/Light Years is the record that sees Rhys’s Welsh revolutionaries fall in love again with Wales. Gone are the American-influenced pedal steel and saxophones and Beach Boys harmonies of previous albums.

They’ve been replaced with frazzled glam rock, electro beats and wall-of-sound guitars and synths that find Rhys and co (the band is sharing lead vocal duties again) wailing about everything from German tram conductors to climbing up Welsh mountains and the merits of British beach attire.

The album’s centrepiece is the eight-minute plus post-rock opus ‘Cardiff in The Sun’. It finds Rhys’s heavily-vocodered voice singing about “running amok in the luxury blocks” down Tiger Bay, and “designing a town in the image of your face”, along to a wall of multi-layered guitar feedback and synthesisers. The experience is like being carried away on a sound wave across the Bristol Channel.

“Sonically, I think it’s one of the best things we’ve ever done,” explains Rhys. “Lyrically, we didn’t want to create some vomit-inducing ode to our hometown. But equally, we aren’t embarrassed about where we come from and we wanted the song on there.”

Recorded at the Manic Street Preachers’ Cardiff-based studios, Music Box, Rhys says the incubation period for the album has been a long one.

Songs such as ‘Inconvenience’ and ‘Moped Eyes’ date back to demo tapes recorded up to nine years ago. “We recorded things very quickly; we didn’t want to dwell on things too much,” he says.

It’s not as political as the band’s George W Bush-baiting Phantom Power, but Dark Days/Light Years is still an outward-looking record. The more so on the Arabic-tinged ‘The Very Best of Neil Diamond’. The title has nothing to do with the ‘Sweet Caroline’ crooner. Instead, it’s about Middle East foreign policy of “carpet bombing by our governments [and] this absurdity in indiscriminate killing.”

For long-standing fans of the band, Super Furry Animals’ revolutionary tendencies are well known; whether it’s name checking Che Guevara and Valentine Strasser in their songs, or buying a tank and touring it around the country, or socialising with fellow Welsh hell raisers Howard Marks and Rhys Ifans.

“There has always been a bit of protest in our songs,” Rhys says. “But I don’t see the album as being a political one; no more than to say it’s an album of its time.”

In fact, being bang on the zeitgeist has been a curious knack for the band – something that dates back to their most notorious hit, the 1996 capitalism-agitating ‘The Man Don’t Give a Fuck’. The song was the first to earn the group its reputation for combining controversy with killer songs at a time when most other bands attached to the Cool Cymru media invention were desperate to appear squeaky clean.

“The media needed some tag for these Welsh bands that were getting publicity,” Rhys remembers of the massive interest afforded to Cool Cymru. “On the plus side we got to make a lot of records and get played on the radio through the hype.

“We were incredibly lucky to be around at that time, but we never wanted to make self-consciously Welsh music. We needed to ignore a lot of the hype and follow our own path. We had to turn a blind eye to the ridiculous hype that was going on, it was becoming a distraction.”

More than 10 years on from the Cool Cymru explosion that made Catatonia, Stereophonics, and Manic Street Preachers household names, it hardly needs explaining how much Wales’ music scene has changed.

If there was a monstrous drink and drug-fuelled hangover for the likes of Stuart Cable and Cerys Matthews, there are some equally sobering truths about where the next crop of Welsh musical talent will come from.

For all of Rhys’ championing of Cardiff and, by extension, Wales’ music scene, the independent venues are shutting at an alarming rate. After the Coal Exchange closed in 2007, The Point in Cardiff became the latest high-profile venue to become a recession victim when it shut in February.

“It’s always a huge loss when an independent venue closes down,” Rhys says. “If you look at who the promoters of The Point had been putting on over the years, it’s been great seeing the type of acts that no other venue here in Wales would put on.

“It’s a place that has been instrumental in changing the music scene in Cardiff; it has a great effect on the young Welsh bands who aren’t signed and are looking to get deals.

“The Point has been a huge education for music fans wanting to hear more leftfield sounds. Hopefully it can reopen to help keep that spirit alive.”

While Rhys says the search for their “definitive sound” still goes on – “despite all this time we’ve still not reached where we want to be” – he says it’s a challenge that’s kept them together. “Our personalities are quite restless, it’s just a relentless drive to come up with a sound like nothing else you’ve heard before.

“After all this time I don’t really know what the biggest myths about us are,” he adds, before making a thoughtful pause. “Maybe the real outlandish things you hear are true and the most banal things are all lies. I think that goes for life in general.”

(First published in The Big Issue in April 2009)