The build up to this year’s Commonwealth Games in Delhi could hardly have been worse. Amid scenes of collapsing bridges, a barely completed, grimy Athletes Village and a growing list of high profile dropouts, the tournament at one stage looked doomed.

But with organisers giving the green light for Delhi 2010, it’s now up to the athletes to retrieve some festivity from the farce.

Around 7,000 athletes from 71 countries will compete in Delhi. The Commonwealth Games is one of the few times home nation athletes can compete against each other.

Team Wales has taken 175 athletes to Delhi, and there’s strong reason to hope it can top its record for the most amount of medals won by a Welsh team – 31 medals, including six gold, were won in 2002 in Manchester.

But for Wales to go one better, the team not only needs winning performances from established athletes like Nicole Cooke, Christian Malcolm, team captain Michaela Breeze and David Davies, but hard work from the next generation too.

Delhi will be the 31-year-old Christian Malcolm’s fourth Commonwealth Games. It will also be the last time the Newport man competes in a Wales running kit. 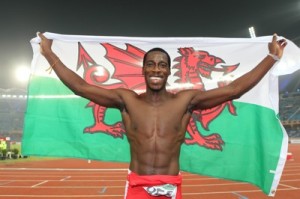 The normally forward-thinking 200m specialist admits to harbouring a few hang ups prior to flying out to India. He knows his opportunities to compete at the highest level are running out.

“It’s still a massive tournament for me,” he says. “It’s always been special to me for the simple reason it’s the only time I get to represent Wales. It’s where I won my first major medal [silver in the 200m in Kuala Lumpur in 1998]. I can’t wait to get out there.”

Despite a career dogged by injuries, Malcolm says the fire still burns inside to reach his full potential. He was within a whisker of claiming gold in the European Championship 200m in July, missing out on first place to France’s Christophe Lemaitre by an eye-watering one hundredth of a second.

But Malcolm refuses to be downbeat. “It would have been a different story in Barcelona if I’d gone into things thinking I was in tip top shape – I wasn’t and still came away with silver,” he explains. “I’m still on an upward curve; it gives me a lot of confidence.”

Malcolm’s love affair with the Commonwealth Games is stoked by the fierce rivalry between the Welsh and English athletes. “I love the banter,” he laughs, “absolutely love it. There’s always a lot of talk going on, obviously the English lads get a bit above
themselves, a bit too cocky for their own good. It’s up to the Welsh team to knock them down a peg or two.”

The support from fans back home also plays its part. “When you’re out there competing you’re totally blocked off from the coverage. It’s only when you switch on your phone to the floods of texts you’re like, flipping heck!”

Constant support didn’t just fire Malcolm onto better things; it made his career. Aged 15 he had football trials at Nottingham Forest, but success at national school level over 100 and 200m was enough to convince him his future lay in athletics.

The influence of legendary Scottish coach Jock Anderson was also decisive. “He was the first person to really believe in me. He was a fiery Scotsman who didn’t mince his words; he kept me out of trouble and taught me if I worked hard I could be among the best,” he
says of his onetime mentor.

“I’ve been unfortunate with injuries through my career but I know on my day I’m one of the best in the world,” he says. “I just want to have the opportunity in the next couple of years to go out there and prove that.”

After being crowned European Championship gold medalist at the 400m hurdles in Barcelona in July, David “Dai” Greene has recaptured the type of early career form that had him singled him out for greatness.

The 24-year-old admits to having felt “pure relief” after crossing the finish line in 48.12 seconds to hold off fellow Welshman Rhys Williams and complete a Wales one-two.

“I’d achieved my season’s goal but the pressure was off because I didn’t have the weight of people’s expectations on me – I guess that all changes now,” he says.

The Llanelli-born champion then followed his Barcelona performance to post a personal best in the 400m hurdles, running 47.88 outdoors at the Continental Cup in Split last month. He’s now in ominously good form not only for another gold medal but to break the British record, which has been held by Kriss Akabusi for 20 years.

It’s quite a turnaround for an athlete who agonisingly missed the cut for the Beijing Olympics in 2008. Describing the prospect of missing out for Delhi as “unthinkable”, he’s primed to run another personal best.

“The tournament is one of the only real chances for the Welsh athletes to compete just for Wales,” he explains. “The last thing I want to do is force myself into a corner, but I will be going for gold in Delhi, obviously.

“I would be disappointed with anything less. I set myself two goals this season; to win gold in Barcelona and to break the 48 second barrier. But now I want a Commonwealth Games medal too.”

Despite describing British athletics as “a poor show” in the last two years, he says “a new generation of Welsh youngsters are coming through – this tournament is a big chance for them to develop.

“Everyone in the Wales camp is really positive about what can be achieved – you can see that in their performances and smiles.”

Like fellow teammate Christian Malcolm, he thrives on the competition between the Welsh and English athletes. “There’s a lot of rivalry there, but it’s always good natured. The whole nation is watching you back home – it’s a big spur to put in your very best.”

“A couple of years ago I was clocking in 49 and a half seconds. I wasn’t exactly dreaming of trying to break the national record,” he explains, “but that’s now the next realistic step.”

Just six hundredths of a second separate Greene from Akabusi’s British record. It seems it’s only a matter of time before it becomes his. “Psychologically, it’s been a wait off my shoulders knowing I can run sub 48 seconds. Unless someone really steps it up in Delhi, I
know can expect to come out on top again.”

Beyond hardcore cycling enthusiasts, not many people may have yet heard of Becky James. But it won’t be too long before the 18-year-old wins a major international tournament medal – and probably a few hearts along the way too. 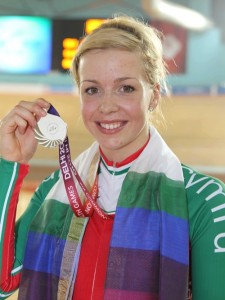 The Abergavenny sprint cycling prodigy’s hotly tipped career might take off big time in Delhi. Although for her outward modesty, you wouldn’t believe she’d just won gold at the World Track Championships in Moscow, smashing the junior world record along the way.

“It was such an incredible feeling,” she says, “not what I was expecting at this stage at all. I had the biggest grin on my face; it only sunk in when I started talking to friends on the phone.”

Now based in Manchester, where she recently turned professional, she admits to having “a few nerves” before heading to Delhi. It will be the biggest tournament she’s ever took part in. “I want to see after a year of going fulltime how my performances can improve,” she explains. “I’m excited to see how things will go out there I Delhi, it’s my first time representing Wales at a major event.”

James was aged 13 when she was discovered by Great Britain National Sprint Coach Iain Dyer, who says he “always knew she was going to be something special.” Her career rise has already invited comparisons with fellow Briton Jason Kenny, who won gold in Beijing aged 20.

But she laughs at the idea the praise might go to her head. “There was no time to celebrate after the win in Moscow,” she explains. “With the Commonwealth Games so close I had to get straight back in the saddle – I was training the next day.”

“If I talked about cycling 24/7 I’d go mad, but it feels strange just concentrating on cycling,” she explains. “Some of my friends in Manchester moved here for uni, when they were off
enjoying freshers week I was preparing for Delhi. But I don’t mind, this is my choice.”

Still, she has a secret weapon to help her stayed chilled out; Bob Marley. “I try not to get too superstitious before meets but yeah, his music makes me relax. It’s just my way of unwinding but whenever I listen to him now I laugh to myself because I know why I’m doing it.”

Citing Scottish triple Olympic gold medal winner Chris Hoy as her sporting inspiration, she’s now been fast tracked by British Cycling for London 2012. “Competing in the next Olympics is on my mind, of course, but I take every tournament one at a time,” she says. “Everything is a little progression and the Commonwealth Games is the next step for me.”