“I still can’t grasp how close I came to the edge,” John Hartson tells The Big Issue with a hefty sigh.  Sat in an upstairs bar in London’s Paddington Station, the relentless bustle of the capital’s rush hour commuters continues below as he remembers the moment when his life teetered on the brink. 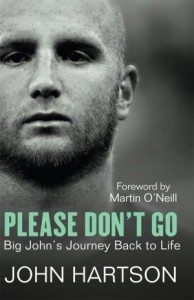 Folding his six foot two stocky frame onto a bar stool, Hartson looks older than his 35-years. Dressed in a grey close-fitting jumper, his pale complexion looks near-translucent under the harsh glow of fluorescent lights. A face framed by ginger fuzz, there’s still the glimmer of the steely-eyed determination that made him the footballer he was.

Fifteen months previous, Hartson was fighting for his life. A series of agonising headaches eventually forced him to drive alone to Swansea’s Singleton Hospital.  By now, the warning signs being given to him by his body were becoming too impossible and too painful to ignore.

Within hours of arriving at hospital he was diagnosed with Stage Four testicular cancer that had spread to his lungs and brain. The date was Friday July 10 2009. That afternoon, the agony of his condition finally tipped him into a coma.

His life hung in the balance for nearly two months as the effects of aggressive radiotherapy, chemotherapy, a life-threatening pneumonia and brain operation swept his cancer-ravaged body. He admits to having “no recollection” of the four to six week period shortly after arriving at Singleton Hospital’s A&E department.

Hartson discovered lumps on his testicles around five years previously, but chose to ignore them. “I just thought they would go,” he explains. “If I’d realised the importance of the lumps I would have gone [to the doctor] a lot sooner, but I didn’t know that lumps on your testicles were a common sign of cancer.”

Survival rates from testicular cancer these days are high. If diagnosed early, treatment has a 90 per cent success rate.  “If the doctors spot it early you will recover,” he says. “But I left it five or six years. I allowed this awful disease to spread and I was in desperate trouble. It nearly cost me my life.”

Hartson is in London to promote his new book, Please Don’t Go, which candidly documents his experiences in the lead up to his diagnosis, recovery and how he’s managed to return to full health. The major blanks in the story, when he was too ill to remember anything, are filled in by his wife, Sarah, and his sister, Vicky.

In his long career as a footballer for the likes of West Ham, Arsenal and Celtic, Hartson seemed to have a hell bent determination to prove he was indestructible. But the fact so few people, let alone ones in the public eye, reach such an advanced stage of cancer and live to tell the tale isn’t lost on him.

“It was so important to me that I did the book,” he says. “I wasn’t aware what the lumps meant, and that’s my point [with the book]; there are still lads out there between 16 and 35, which is a common age for the disease, who still don’t know about the dangers.

“I hope people will read the book and hear my story and if they’re concerned about any lumps they will go straight away to get them looked at by a doctor.”

With the exception of Lance Armstrong’s It’s Not About The Bike – which documented the Australian cyclists own battle with testicular cancer – Hartson’s book stands alone among sporting autobiographies for its unflinching honesty. No detail or tears shed are spared.

He says since recovering he’s been determined “some good” will come from his ordeal. Through his work setting up the John Hartson Foundation, he’s been touring schools, colleges and football clubs across the country to warn other men about the threat posed by testicular cancer.

His message is simple; if in doubt, get checked out. But it’s a missive that could save lives. In establishing his own foundation, Hartson has been able to build a bridge between his experiences in the lead up to his illness and discovering a new lease on life.

Regular punditry stints for S4C, Sky Sports and Al-Jazeera keep him busy. His work schedule is arguably higher than it was than before he was ill. If he has his way, it could soon get even bigger again.

Hartson continues to be linked with the Wales managerial job. After playing for Wales 51 times before retiring in 2006, he admits the chance to lead the next generation of Welsh football “would be a dream.”

“I’ve applied for the job; a lot of people don’t think [The Welsh FA] will take me seriously enough. But a lot of people do want me to get it; everyone I speak to wishes me all the best in trying to get the job and would love to see me do it.

“But others are a bit more skeptical in terms of what type of job I would do,” he continues. Hartson has no previous managerial experience but he’s already set his sights high. “In life you need someone to give you that chance, that little break in life. We all need one.”

The fact he’s contemplating such a demanding job shows the remarkable turnaround there’s been in his health over the last year and a half. “My life is fabulous these days,” he says about his time in Swansea. “I have a wonderful, caring wife, four children – two who live with me and my two eldest [from a previous marriage] live 15 minutes away with their mum.

“I appreciate the simpler things in life now; when you’re in bed for six weeks and you lose all strength, you lose all independence,” he explains. “I appreciate being able to see my children grow up and just the simple everyday things you can take for granted.”

Throughout his playing career, Hartson attracted controversy on and off the pitch. An occasionally volcanic temper, altercations with referees, opposition players and even his own teammates sometimes detracted from his undoubted talent.

In Please Don’t Go he faces up to his regrets – the money frittered away on fast cars and gambling and the breakup of his first marriage. They are sorrows he backs up in person. He describes the infamous incident when he kicked his West Ham teammate Eyal Berkovich in the face after the Israeli player hit him as “something I regret hugely.”

“Of course there’s stuff I’d have wanted to do differently,” he considers. “I wish some things had never happened but you have to accept your mistakes; that’s something that goes for most people.”

As he glances towards the departures board, you sense he’s already thinking about his next journey. For so many Welsh people who’ve lived in London, Paddington Station means one thing; going home.

“I’m looking forward to getting back mate,” he offers. “It’s been a long two days; I’ll get in, see the kids in time for bed and be with my wife,” he smiles. “It’s about time.” And just like that he’s gone. Gone to catch the train back to his family and beloved Wales. Gone to carry on with the rest of his life.