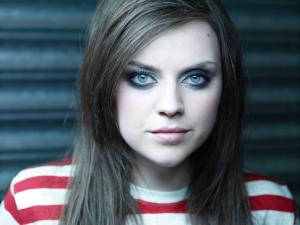 If the phrase “big in Germany” still conjures up images of brainlessly-dated Europop cheese, Satan-worshipping Scandinavian metal bands or, even worse, gulp, David Hasselhoff’s solo career, then think again. Scottish singer-songwriter Amy Macdonald certainly doesn’t fit that cliché, and yet the 22 year old has sold more albums in Germany than in any other country in the world. Yes, even the UK.

It’s fitting therefore that The Big Issue has taken the red-eye flight to Berlin to spend a freezing day in February with Macdonald as she gears up to launch her hotly-anticipated second album, A Curious Thing, to an enthusiastic German public.

She has a growing list of admirers. Girls want to be like her, boys want to date her and U2 love her videos, while other established big names such as Fran Healy from Travis, Elton John, Roger Daltrey and Paul Weller have gushed praise in her direction.

Three years have passed since her debut album, This Is The Life, announced her talents to the world and went on to shift three million copies worldwide, topping the charts in five countries. By her own admission, the last few years have been “a whirlwind, a real blur”, but with her youthful looks and old head, she’s taking everything in her stride.

When we meet up, it’s on a comfy sofa in the offices of Universal Records. There’s a bitter whip to the wind; the temperature is minus five and there’s a foot of snow everywhere. Out the window you can watch ice floating down the River Spree. Macdonald’s had a 5am wake-up call to get ready for a day’s worth of press interviews, photo shoots and a fan meet and greet. Tonight she plays a sold-out gig at the city’s hip Astra venue in east Berlin.

“It’s nice to speak to someone who can understand me,” she says in an unmistakable Scots lilt. “I’ve already been asked today if I still speak Scottish or if I’ve finally learned English. I’ve been telling the German press I’ve always spoken English and they’ve been saying, ‘No, we can tell it’s Scottish’. But I’m like, trust me on this one,” she laughs.

It’s Macdonald’s fourth time in Berlin. “Germany is such a huge country, that’s why the sales have been so great. Everyone here has been so enthusiastic about what I do. Basically, everyone seems to know someone who owns my album.”

She puts the success down to “good old-fashioned radio play”, arguing that her song ‘This Is The Life’ has generated a word-of-mouth following. “That’s the way it should be,” she explains.

“I think the problem in Britain sometimes is that there is so much hype. I might know somebody’s entire life story before I’ve even heard them sing. I find that so strange because it’s the music industry, but some people seem determined to focus on anything but what it is you’re writing.”

Dressed in an elegant but understated black dress, Amy Macdonald shuffles her posture between questions and frequently flashes a kohl-eyed stare at her manager, Sarah Erasmus, who is sat in the corner listening in. The inseparable duo share in-jokes throughout the day.

Big things are expected from A Curious Thing. The songs were nearly all written on an acoustic guitar at various stages over the last 12 months. Solid musicianship, honed by endless touring stints, has become a cornerstone of her live sound. So has her contralto voice, which has shades of a young Kirsty MacColl – a likeness she’s clearly aware of given that she’s covered The Pogues’ ‘Fairytale of New York’ live on numerous occasions.

The songs on the new album are no great departure from what she’s done before but it’s clear her knack of writing enormous choruses and hook-laden ballads has strengthened. “I’ve never tried to change musically,” she says. “When I hear artists say they’re going in a new direction I don’t really understand – because to me, writing songs is a natural progression. For the past two-and-a-half years all I’ve done is play live. The sound has got a bit rockier and that’s maybe come across on the album.

“There is always a bit of nervousness about whether people will like it, but I’m just dying for it to be out there now. I know I’ve done the best I can do right now and I think that’s all I can ask of myself.”

A key song from the album is ‘No Roots’, which also gave the source of inspiration for the album’s title. “Naming the album was probably the most difficult thing,” she says. The line in the song goes: “This life I lead it’s a curious thing, but I can’t deny the happiness it brings.”

“It just seemed really apt. It is a strange life and there are times I think, what on earth am I doing? But you have to learn to just go with it. It’s quite difficult to explain the meaning behind the lyrics,” she considers.

“I like the mystery side of it; one of my favourite bands is The Killers and they never explain what their songs are about. I love that.”

A little later, The Big Issue sits in on a bank of radio interviews with the German press. It makes for a fascinating eavesdrop. She’s unfazed by the awkward questions flung her way and her answers are often highly entertaining.

“I don’t think it matters what I look like, do you?” she quizzes one interviewer. “Pete Doherty doesn’t inspire me, he threw it all away,” she tells another. We then learn that she “doesn’t have male groupies” and that “nothing can prepare you for what fame does to you”.

She describes herself as “a dreamer” and explains that her new song, ‘My Only
One’, “isn’t just about the death of Michael Jackson”.

But it’s her reply to a clumsily-worded question about her love life that really tests her patience. In 2008, Macdonald got engaged to Partick Thistle footballer Steve Lovell, whom she lives with near Glasgow. The journalist states that getting engaged at the then age of 20 was considered “very young in Germany”. In measured tones, Macdonald explains there were no immediate plans to walk up the aisle. But at any rate, what she does in her personal life “has no bearing on my music”. Touche.

Moments before the radio slots, Macdonald told The Big Issue that her relationship with Lovell “was not about what either of us do for a living”, and that neither wished to court publicity.

“It was quite hard at the beginning because the press would write stuff about him and I thought, you don’t need to drag him into it. I think he can now see the funny side of things and he knows now that a lot of what gets written is complete rubbish.”

If Macdonald has ever needed to ask anyone about how to deal with fame, she has had her opportunities. It was at a gig in Berlin where she met U2, who revealed themselves to be huge fans of hers. “That was one of the funniest moments of my life,” she remembers.

“I was sat in their dressing room for about an hour chatting to Larry [as in Mullen Jr, the group’s drummer]. He knew all of my videos and was talking about how much he loved the one for ‘This Is The Life’. It was so weird. It would never even occur to me someone like that would have a clue who I was, let alone have an opinion on my music.”

Among her own pals, the running joke of the day was that Macdonald had become bezzy mates with Bono, despite the U2 frontman not having put in an appearance. Yet! She later returned to her own dressing room to find a note signed by the entire band which read: “Please come and say hello to your fan club.” Bono was, it turns out, as taken with Macdonald as Mullen Jr.

However, the Scots singer swears blind that when she returns to her old stamping ground in Bishopbriggs, she’s still “little Amy from Glasgow” leading a normal life. “I could walk down the street easy, I could go to the pub and nobody would care,” she explains. “I don’t want to be recognised. I’m not walking around in Lady Gaga-style outfits; I don’t have an Amy Winehouse beehive on my head. I don’t want to be Lily Allen – people just aren’t looking for that with me.”

So was there a moment when she knew her music was here to stay? Her answer is a little off the wall, and yet telling: the night of Scotland’s 1-0 victory over Holland at Hampden Park in November 2003 was her turning point. Macdonald was gigging at an open mike night at Brunswick Cellars on Glasgow’s Sauchiehall Street when a victorious Tartan Army ambled in to pack out the tiny pub.

“It was my turn to go up and play but everyone was so distracted I thought nobody was going to listen,” she says. “So I stood up and played ‘Flower of Scotland’. The whole place went silent and then it just exploded with everyone singing along. I don’t think I’ve ever had a bigger cheer in my life.”

Our day in Berlin ends at the Astra with a very well-received gig, featuring much of her new material. The German fans, most of which are Macdonald’s age, hang on her every word. The anticipation is building for album number two, something which Amy is keenly aware.

Tucked in between is Amy MacDonald, a decision you sense is slightly tongue in cheek; something she confirms five minutes later. But in this wonder wall of celebrity Scots, Macdonald’s star is on the rise. Her place among the greats may not be far so from her grasp.

(First published in The Big Issue in March 2010)