One of the best things about listening to Steve Mason’s first album to be released under his own name is realising that it ever got made at all.

Despite being a founding member of the highly acclaimed Edinburgh indie outfit The Beta Band, Mason has up until now been perceived as a cup half full type of character. 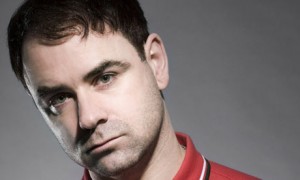 Rocketed to fame thanks to a flurry of great releases, praise from Noel Gallagher and industry mogul Alan McGee, and an achingly hip name check in the John Cusack-starring film High Fidelity, The Beta Band seemed to have everything.

But creative pressure forced them to call it quits in 2004, leaving Mason with an uncertain future, a spiraling depression and a tax bill running into tens of thousands of pounds.

The 37-year-old’s new album, Boys Outside, sees him embrace a more optimistic outlook as he admits to The Big Issue how he had to overcome massive personal demons and a breakdown that pushed him to the brink of suicide in order for his latest work to see the light of day.

Describing it as the first album he’s written that he’s “ever felt happy with”, Boys Outside is Mason’s musical journey out of the shadows.

He briefly quit the music industry altogether following The Beta Band’s split, but Mason says the personal problems ran much deeper than many realised. “It was never anything to do with falling out of love with music,” he explains, “it was just various mental problems and pressures that I had. It wasn’t music I fell out of love with, it was life. When I was telling people I didn’t want to carry on, I meant living,
not putting out records.

“I don’t think it’s a dark album,” Mason says of Boys Outside. “I think it’s really uplifting. When I was younger and feeling down it always helped me to listen to stuff that emoted the same feelings as the ones I felt because it made me feel like I’m not alone.”

Joined by hotshot pop producer Richard X, who’s worked with the likes of Liberty X and Sugababes, Mason’s album is one of the most nakedly honest he’s ever been involved with. But the music tackles political issues too.

‘Yesterday’ finds the singer tackling cultural stagnation, while ‘Stress Position’ is a broadside against ageing millionaire rockers who sell out their music to the advertising industry.

“When I was in The Beta Band it was quite a big thing that we’d never use tracks for adverts that we didn’t feel were right,” he says. “We turned down a car commercial for half a million dollars once, but it’s so hard for musicians to make any money these days.

“What I do have a problem with is established artists like Iggy Pop and John Lydon taking cash for advertising when for 30 years they stood against cultural blandness.  Artists like that held people’s lives in the palm of their hands; now they’re shitting on a whole generation of people by going cap in hand to butter companies and insurance firms.”

For Mason, the issue is about integrity. “I’ve always prided myself in trying to be as honest as I can, especially with the press,” he explains. Mason infamously once described The Beta Band’s debut album as “fucking awful”.

“This is why I can talk to you about my depression – through honesty. You’ve only got to listen to the album to realise that’s how I am.”

Mason is cagey about viewing music as his own personal therapy but admits his new work has given him a new focus.  “I do have a self-destructive nature and I have to battle that, but I know I will never get another chance like this. There will be no third chance, I’ve got to grab this and try to make the most of it. I’d be a fool to look backwards now.”

Article first published in The Big Issue in August 2010.