Question and answer session with Pete Postlethwaite about his environmental film, The Age of Stupid.

There are still so many organisations in the world who seem hell bent on distorting arguments for or against the impact of climate change’s existence. What do you believe we must not lose sight of? 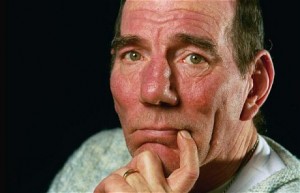 We may not be the first species to have brought about its own extinction, but we may well be the first to do so knowingly. The thing to remember is how important it is to realise that The Age of Stupid doesn’t look very far into the future. The events shown could happen in some of our lifetimes, certainly in the ones of our children.

How many books and films released, like George Orwell’s 1984 or Stanley Kubrick’s 2001: A Space Odyssey reference dates that at the time seemed aeons in the future? We need to be careful in thinking the events in the film are so far away – they’re not.

How would you describe your character’s outlook in the film?

My character’s role in the film is a personal one. He’s looking back on history, wondering what forgiveness he can hope to get from his grandchildren. The question we keep coming back to in the film is, why didn’t we do something? Why was it that knowing what we know, we still didn’t take action?

Does film lend itself well to answering the question The Age of Stupid poses?

It’s the beauty of the medium of film that we can fast forward to the consequences of our actions in a way we can’t in our real lives. It gives an insight that few other artistic mediums can.

What kinds of reaction has the film provoked so far?

We have had contact from Obama’s representatives about the film, which was very exciting. We know Prince Charles wants a private screening at Clarence House too. We are in touch with people who have the chance to influence public opinion massively. There is no room for complacency any more. Look at how much optimism there was in this country about Tony Blair’s election and look at how it turned out. Obama needs to be Martin Luther King, JFK and Ghandi rolled into one – no pressure, or anything. His presidency offers a significant hope that a major corner has been turned.

What do you believe are the main risks to having significant progress on tackling climate change globally?

The oppositional forces at play in the dark empire are very, very powerful. There are still many people against the message of this film. The outgoing Bush administration signed many agreements with the oil business, which is perhaps why there is still even a debate about whether global warming exists. It’s why tobacco companies were able to say for years that smoking doesn’t cause cancer – there’s an awful lot of money tied to the tobacco lobby.

If thinking global means acting local, how have you tried to be a greener person?

For me personally, I’ve very much grown to be green. That has a lot to do with my wife, who has been that way for many years. Even when the children were growing up, I remember if they were walking in the countryside they would pick up pieces of litter and mutter something about urban terrorists. I would have to ask them what they meant.

What do you wish the film to achieve?

My ultimate hopes are for it to be seen. If it can become part of the global debate about the future of our planet, I will be immensely proud. The cynic in me acknowledges that because of the mixed messages big business has been giving us, people are not aware of what the environmental consequences are. Personally, I think change is within our own hands – and that’s a great thing.

First published in The Big Issue in March 2009.