Question and answer session with the Never Mind The Buzzcocks host

Tell us about your first foray into comedy.

My first crash course in comedy came when I was 14. My parents sent me to Saturday morning drama school in a bid to bring me out of my shell more. I was the half-time interlude – the ballet and tap dancers were one and the same and there was a 10-minute gap while they changed shoes. I volunteered to do some stand-up, looking back on it now it was probably the most idiotic thing I’d ever done, but I got a few laughs and it set me off doing this. 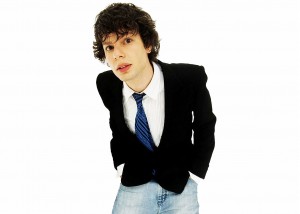 Do you ever think you go too far rubbing your guests up the wrong way?

I don’t see my humour towards celebrities as being rude. It’s more cheeky, like a lovely playful kitten. There’s a big tradition in US comedy of roasting celebs or people who are maybe a little puffed up in the media. The impression you get is that they take themselves way too seriously to realise the whole entertainment industry is just an extended bizarre joke. My aim is to use comedy to toy with the whole ridiculous brand some people have created for themselves and unmask them.

What’s the idea behind your ‘No Self’ tour?

The gigs play with the idea of the mind being one huge illusion. That in some way we are all completely deluded about who we are and what’s happening in the world. But to do so through a type of comedy that aims to say something truthful.

What do you get obsessed about?

I obsess over finding an answer to problems through comedy. I have an obsession in my stand-up work of finding the most truthful thing to say, however unpalatable, instead of route one comedy – the easy option.

What’s your philosophy around having to work for a living?

You aren’t doing your job properly if your employers think you’re a safe pair of hands. If you take no risks you aren’t doing all that you can. Taking risks and making mistakes is the only way you learn anything.

Why stand-up over other forms of comedy?

Stand-up comedy is comedy in its purest form. It’s the thing I love most and it’s the place for truisms and humour that can’t be used elsewhere. If people connect with an embarrassing situation or awkward thing they’ve experienced through comedy then a horribly negative thing can be turned into something positive. It helps bring humour to dark situations.

What personal trait do you have that you dislike?

I have to get over my anger issues. I despite TV programmes that assume the audience are stupid and therefore they must create a stupid show. Stupidity is all over the media in TV, radio and magazines; the people in charge think their demographic equals idiot, which makes people behave worse than they really are.

Do you have a love-hate relationship with being in the public eye?

I’ve never fully embraced fame. I’m the perennial outsider looking in on it all. I’ve never put my name to a soap powder; I don’t attend big events or do anything just for the sake of being seen. That whole world of celebrity just isn’t interesting to me. If my publicist told me I had to sell myself more I think I’d break down and cry.

Is too much of today’s humour self-consciously bleak?

I don’t view comedy as this big misanthropic thing. I used to think you had to be miserable to be funny, but there has to be optimism for comedy to work. There would be no humour if something was relentlessly bleak and nasty.

Who do you admire in comedy?

The stand-up comics I love most are deeply personal about their experiences. I really don’t get smug one-liner humour; it’s such a waste. The comedians I admire most – Richard Prior, Bill Hicks, Lenny Bruce – could rip themselves open and they had an amazing vulnerability in their work. But there’s something unfailingly honest in their humour that you can identify with.

Article first published in The Big Issue in April 2008.