Thousands of children in Wales face a bleak winter as spiralling fuel prices and lack of opportunities in deprived communities across the Valleys has again raised the spectre of child poverty.

A report last week by the Campaign to End Child Poverty, a coalition of more than 130 UK organisations, found up to one-third of children in areas of South Wales are living in or on the brink of poverty. 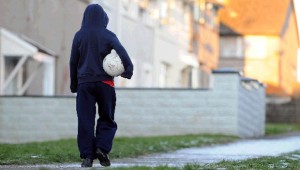 Limited social opportunities and as much as 36 per cent of children growing up in workless families in some areas means kids as young as five are being socially excluded.

Among the worst-affected areas are the Rhymney Valley, where 510 kids in Bargoed – 36 per cent of the town’s total childhood population – are deemed to be living in dangerous levels of poverty.

Other communities in the area affected by restrictive job opportunities and limited public services include Hengoed, where 535 children (36 per cent) are living in poverty, and the Aber Valley, where the number stands at 306 children (35 per cent).

“There is a lack of well-paid full-time jobs in areas such as the South Wales Valleys due to long-term lack of investment in infrastructure and skills,” explains Plaid Cymru AM Leanne Wood. “Some of the Valleys constituencies have the lowest levels of job vacancies in Wales and low family incomes can keep children trapped in a cycle of poverty.”

Wood, who is active in the Campaign to End Child Poverty’s calls to ensure the government halves child poverty by 2010, said creating better employment and housing are among the measures that will stop children falling further behind.”

“The quality of housing – both private and public – is crucial,” she says. “Access to well-paid jobs, quality homes, and affordable public transport are the conditions for people to be able to beat poverty, and bringing down the consumer price of fuel and food.”

The rising costs of fuel prices are a decisive factor in the ability of some children to lead a normal and healthy life. “Fuel poverty has a direct impact on the health of children,” says Sean O’Neill, policy director at the charity Children in Wales.

“Not just in increased risk of respiratory problems and infections, but also in having a terrible affect on a family’s home life.

“Fuel poverty has a knock-on effect on education by creating a difficult or stressful home situation,” O’Neill explains. “Families unable to heat their entire home are sometimes forced to live in one room. A big concern we have at Children in Wales is
pre-payment metres,which we think disproportionately target families
struggling to cope.”

It’s a sentiment echoed by Donald Hirsch, author of a report commissioned by the Joseph Rowntree Foundation last week, which found that remedying the consequences of child poverty costs the government £25 billion a year.

“The long-term costs of continuous exclusion can be measured by limited educational prospects, less chance of leading a happy life, poor health, and an increased possibility of an individual turning to crime,” he says.

“In South Wales, it’s so important that however difficult the current economic situation gets, that families struggling to cope are not given up on,” he adds.

However, clearly not enough is being done for Welsh children. “There needs to be a focus on the moral responsibilities of energy companies in the way they deal with families struggling to pay fuel bills,” O’Neill says.

“There is help being offered by the Assembly Government, but the money is often ring fenced for a particular sector, typically the elderly.”

Meanwhile, the “social stigma” attached to poverty is something Wood says is preventing Welsh families from getting help. “My advice to struggling families would be to contact their local Citizens Advice Bureau and make sure they are getting all the benefits they are entitled to,” she says.

“I would also urge any families who want to speak out to contact groups and charities such as Barnardo’s, Child Poverty Action, and Save The Children.”

Article first published in The Big Issue in November 2008.