Love Steals Us From Loneliness

Human tragedy can befall any community anywhere. But when a cluster of 17 suicides involving young men and women occurred in the Bridgend area over 13 months from January 2007, relentless national media coverage threatened to forever mark the place as “the suicide town”. 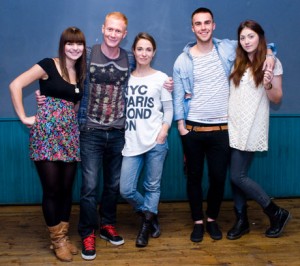 Two years after the Bridgend story first broke, Welsh playwright Gary Owen had to face up to his own personal dilemma. When contacted by the newly-formed National Theatre Wales about writing a play for its debut season, his thoughts immediately turned towards his hometown.

The 38-year-old writer admits the natural urge to write about somewhere he knew so well was strong. However, his instinct was very nearly derailed by the problem of telling a story about a town where even the mention of “the S word” ran the risk, in Owen’s words, of “glorifying” an already notorious story. Owen’s choice was to write or not to write. The fact he eventually did adds extra intrigue to Love Steals Us From Loneliness – the play that so nearly never saw the light of day.

“When I first talked to people about the idea of writing a play based in Bridgend, four or five people all said the same thing to me, ‘Don’t write about  there, it’s a shit place’,” Owen remembers. “People only wanted to talk about it as ‘the suicide town’.

“Their mindset was, ‘no wonder everyone wants to do away with themselves in a place like that’. I was completely taken aback. “I couldn’t square what everyone in the press was writing about, and the place with my own memories growing up there – I have fond memories of Bridgend,” he says.

It was only through the intervention of National Theatre Wales’ artistic director John McGrath that Owen’s mind was finally made up. “Without the influence of John I’m not sure the play would ever have been written,” he says.

“People’s perception of Bridgend changed after 2007; it became known as ‘the town where suicides happen’. I didn’t want to create something that fuelled that image. But then I had this revelation, inspired by John, that the play didn’t need to be this big negative.” Love Steals Us From Loneliness is less about the Bridgend suicides and more about a group of adolescents struggling to come to terms with thoughts, feelings and
decisions that will come to have profound consequences on their adult lives.

The play’s opening scenes take place in a stage mock-up of The Roof, the popular Bridgend boozer where an incident between two of the play’s lead characters, Catrin (Katie Elin-Salt) and Scott (Mark Sumner), throws the audience into a series of leaps
into the future – over a 40-year period. The character’s decisions and feelings are
recollected as their lives continue to be affected by that one event. “The Roof is an extraordinary place,”

Owen says. “It’s the type of saloon bar you’d find in a Western. “On any Friday night you’d be surrounded by hundreds of people piling in after work to drink away the weekend.” Sense of place was highly important to Owen, but so too was understanding how adolescents think. Fortunately, he didn’t need to search too far. “I know from my own experience that everything at that age seems heightened – feelings are massive,” he says.

“I wanted to give a perspective of what it’s like to be inside the mind of a teenager coming to terms with their place in the world and relationships with others. You’re at that stage when you have to make huge decisions that will affect you for years to come. I think it’s under-recognised how tough a time it can be.”

Owen’s decision to tell the story by imagining the characters at various stages in their
adult life served a particular purpose. “When you’re in the grip of certain feelings over a person or situation, it’s hard to see the future,” he says. “But to look back on the situation years later makes you think –why on earth was I so obsessed with that one person? Why did I want to even go out with them in the first place?” He laughs: “It was a reminder that those negative feelings fade over time.”

Finding a youthful cast also experienced enough to play their characters as much older people was crucial. “We needed the cast to have gone completely through adolescence themselves, but we also knew they’d need to be comfortable playing the person as a much older character,” he says. “But we’re so happy with them, they’ve given it everything.”

What about the significance of the play’s title? “I had a working title for the piece, which stuck for ages,” he explains. “It was called The Play Against Death but I knew it wouldn’t stick. “The inspiration for the final title came directly from the song by Idlewild [the Scottish indie band]; the sentiment seemed so perfect; I’m annoyed I never thought of it myself. “I liked this notion of love being a sneakily benevolent thing that crept up on you,” he says, “something that could steal you away from harm.”

Owen says there are “many plays” he could have chosen to write about Bridgend, but this one felt the most authentic. “I have become protective of the place,” Owen admits. “I became suspicious of the media coverage. I thought the reporting was intrusive and disrespectful, I felt it lacked compassion. “I could understand the anger of other people from the area, I shared some of it too,” he continues.

“The bottom line is the place you’re from is like an extended family. You can criticise it all you like but if an outsider dares to, well…” his voice tails off to ponder the retribution. “Suicide is not a Bridgend issue,” he continues. “It happens all over the world and it’s been proven to occur in clusters.

“When I was being contacted by journalists to give my opinion on what was happening in Bridgend I couldn’t find anything to account for something so inexplicable. “Like any adolescent I had my ups and downs, but my time spent in Bridgend was happy. It’s not the place some people think it is.”

So is it time for a happier story to emerge from Bridgend? “I hope so,” Owens says, “I really hope so.”