The hordes of Richard Hawley fans who hang on the ardently working class Sheffield man’s every baritone breath must secretly dread every new album release. Such is his reputation for heartbreaking balladry, he’s inadvertently soundtracked countless relationship breakups. 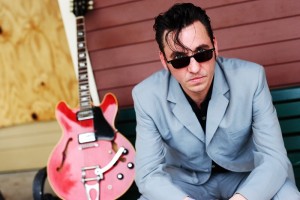 But this time the 41-year-old is giving cautionary advice to “take no loved one for granted” on his latest release, the bravely mournful ‘Truelove’s Gutter’.

Despite the masses of records sold since his 2006 Mercury Music Prize shortlisted ‘Coles Corner’ propelled him to the mainstream – and prompted that year’s winner Alex Turner of Arctic Monkeys to say Hawley had “just been robbed” – he’s had to contend with keeping his feet on the ground.

“I will stand by that mentality till the day I die,” he says. “When that door closes and I’m in my house with my family, I’m not a rock star. I’m a dad and husband. I will guard that privilege with my life.”

‘Truelove’s Gutter’, named after a long lost corner of 17th century Sheffield, is, even by Hawley’s standards, darkly romantic.

“When I came back off tour last December there were certain things that I vowed I’d never do,” he explains. “Because I’ve gone off the rails in the past after coming home I was certain that wouldn’t happen again.

“But it was only after coming back I realised how much I’d lost touch with my friends and what was going on in their lives, it was upsetting. There I was being the big rock musician and I came back to all this sadness.” The songs on ‘Truelove’s Gutter’ are about Hawley’s
close friends.

Among the familiar Richard Hawley touchstones of Scott Walker, Roy Orbison and rockabilly music, Hawley has revived obsolete instruments like the megabass waterphone and cristal baschet. A slender nine songs, ‘Truelove’s Gutter’ is a deeply personal work about “where all the broken things end up.”

“I have a friend who’s like the ghost of Miss Havisham [from Great Expectations],” he says. “She was jilted by a lover and just kept holding on to that moment in her life, never having the means to move on with her life.” Her story is told on the album’s lip trembling coda, ‘Don’t You Cry’.

Elsewhere, ‘Remorse Code’ is about a pal of Hawley’s who “fucked himself up royally with cocaine”, while the woozy blues of ‘Ashes on The Fire’ tackles rejection. Cheery fare it isn’t, but Hawley’s adamant it’s not a “misery fest”.

“I’ve always drawn on the things in life that are happening around me,” he explains. “But I don’t think the songs are gloomy, they’re soothing because you know other people feel the same.

“It would have been so easy to spin out 10 more songs of the same thing,” he says of the follow up to 2007’s ‘Lady’s Bridge’. “But I couldn’t look myself in the mirror knowing I’d not push myself, it would be creative cowardice.”

As always, ‘Truelove’s Gutter’ is inspired by Hawley’s love affair with Sheffield. “It’s funny how things turn out,” he muses. “I was talking to Jarvis [Cocker] about this – isn’t it strange
how he buggered off to London to spend the next 10 years writing about Sheffield and I’ve stayed put to do the same.”

Despite his assertion Britain has “the widest gap between rich and poor since Victorian times” and that big money is ruining football – “the time when you could be on a terrace sipping Bovril and eating a meat pie is gone forever” – Hawley says he’s not lost faith in
humanity.

Album highlight ‘For Your Lover Give Some Time’ urges listeners to undervalue nobody. “It’s how you end up if you’re not careful. If you fall in love it strengthens over time but you become aware of their weaknesses. The song is a gentle reminder you sometimes don’t know the value of what you have.” On ‘Truelove’s Gutter’, Hawley has something
priceless.

(First published in The Big Issue in October 2009)