Call it the curse of The Sound of Music, but Connie Fisher is not the first star to be struck down by a career threatening problem with her vocal cords after playing Maria von Trapp. Julie Andrews, the film’s Maria, faced the terrifying prospect of never singing again after an operation to remove a nodule on her vocal cords went wrong in 1999. 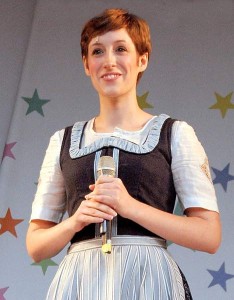 Rewind to April this year and 26-year-old Fisher had to pull out of a 14-date UK tour
for an operation to correct congenital fusion anomalies. The condition, which fused parts of her vocal cords together, is one she’s had since birth. The outcome of the operation, which stopped Fisher from speaking for many weeks, would decide whether she would sing again.

For a while, the future looked bleak for the 2006 winner of BBC One’s talent contest, How Do You Solve A Problem Like Maria. So when The Big Issue Cymru picks up the phone to speak to Connie Fisher in between rehearsals in London for her forthcoming run in The Sound of Music in Cardiff this month, it’s a welcome relief to hear a sprightly and agile voice on the end of the line.

For her doctors, Fisher’s ability to recover from such adversity was nothing short of “a miracle”. In Fisher’s words, “it’s been a tough year, the hardest of my life. I had a very unexpected shock, a very difficult time emotionally and, as you can probably imagine, I just couldn’t wait to get back performing.

“I’ve been climbing a mountain to get back to where I should be,” she says. ‘Climb Ev’ry Mountain’ is of course one of Maria’s big numbers. “It’s been an overwhelming time.”

Now back on the path to stardom that began when 1.4m people voted her the best person in the country to play Maria von Trapp in 2006, Fisher describes her life since winning How Do You Solve A Problem Like Maria as “a complete roller coaster.”

As showbiz analogies go, it’s a well-worn one, but it’s also valid. She says winning the show now seems like a lifetime ago. “I remember saying in an interview at the time ‘I’m the luckiest girl alive.’

The experience has absolutely changed my life, the experiences I’ve had since then
have been wonderful; performing on stage, the people you meet, recording albums and touring.” It’s been a meteoric rise for the Northern Ireland-born singer, who spent her formative years on a family-owned farm in Hayscastle, near Haverford West.

“It is a demanding industry but the way I approach it is that there are times when you forget what it is you’re doing,” she explains. “Say, you’re on the tube and you haven’t got much make up on and you’re sitting reading the paper and eating a sandwich and all of a sudden, someone will turn around and say: ‘Are you Connie Fisher?’ or ‘I love your album’, or ‘I loved your performance in The Sound of Music…’ Her voice tails off as she grasps for the right words.

“It’s just really nice when people take the time to do something like that. I sometimes forget I’m in the spotlight at all.” she says, laughing nervously. “The other day I saw [The Office actor] Martin Freeman on the tube and I thought to myself, ‘hey look it’s Martin Freeman, I better go over and say hi’. And then I thought, look, just leave him alone! He’s travelling to work, he might not want to be disturbed just because someone recognises him.”

In the last three years, Fisher has slowly adjusted to strangers holding her gaze for a fraction too long. If the trauma of her near career-ending vocal problems has taught her anything, it’s that she has to seize every chance to enjoy what she has. “You have to balance your life and listen to what your body’s telling you,” she says. “When I’m touring it’s all about working, for me. But I love what I do so, for me, singing and acting is everything. As long as I’m well enough to do it, that’s all that matters.

I’m lucky that my job is also my hobby.” A hobby, yes, but one that’s changed her life forever. Fisher’s path to stardom began in the living room of her family home in west Wales when she was a toddler. Encouraged to sing by her grandmother, who was the first to introduce her to musicals, auditions for school plays later followed.

Originally trained to sing in Welsh – “my vowels are a bit different to everyone else’s” she explains – Fisher was introduced to the work of Julie Andrews by the time she was eight. Mary Poppins and The Sound of Music left an indelible mark on her. She still cites Andrews, whom she has met, as a major influence on her life.

“My family was living on a farm in rural Wales, we spent a lot of time walking through hills and singing – very Maria-like, singing in the mountains.” It was just the perfect home. It was after singing ‘Supercalifragilisticexpialidocious’ in a school play that people realised she could “hold a tune” and that a stage career beckoned.

But like so many talented hopefuls, finding her big break was tough. After finishing drama school, her career hit an impasse. Denied the chance to progress, she had to consider her options.

“I was stuck [working] in telesales and I had no forthcoming auditions. I had come very close a few times but kept missing out,” she remembers. “I kept telling myself something big was going to happen soon, but at the same time I was looking at my working life and thinking there must be something better than this.”

Nervousness isn’t something you’d normally associate with people who make a living singing in front of millions, but Fisher admits insecurities occasionally haunt her.

“When you’re on stage you’re completely in that moment,” she offers. “When I’m being Connie, I’m quite sensitive. Although your job is to tell a story to thousands of people, maybe I’m not so confident going to a party full of people I don’t know and I have to be myself. I think a lot of people might empathise with that situation.”

But for Fisher, it all comes down to inspiration. “I’ve had role models but I’ve never tried to put anyone on a pedestal. Julie Andrews is a big inspiration to me and it’s just bizarre how I’ve ending up doing the same show as her.

“Having met her I can say she does live up to expectations; she’s elegant, loyal, polite, well-mannered and she made you feel special when she spoke to you. After meeting her I felt that’s who I wanted to aspire to be.

“Some people sing with their voices and their technical ability,” she adds. “Others sing with their hearts. I fall into the latter category. You may not always be of fine voice but you’ll sing with a fine heart. As long as you’re telling the story, I think it’s a good way to be.”

(First published in The Big Issue in July 2009)