Chris Packham is peering out the window of his office in the New Forest. As he looks across his garden he reminds himself how fragile and finite nature can seem. “I look outside and I see all kinds of plants and animal life – birds and insects everywhere,” he says. “And I think about how much worse off we would be if it were to be taken away. 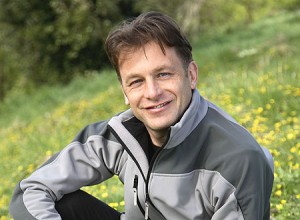 “This is our natural habitat,” he continues. “We talk about the countryside like it’s some far off place – it’s all around us.” Packham is talking to The Big Issue ahead of his new TV series, The Nature of Britain: A User’s Guide. In it he travels the length and breadth of the British Isles in search of the country’s most fascinating natural habitats.

From Exmoor to the Scottish Highlands and Northumbria, Packham says he’s reaffirmed his love of the ecological variety that Britain has. He now wants everyone to share his enthusiasm. “I’ve spent a great deal of my life traveling around this country and what I love about it is that it is unique,” he says. “We’re on the very edge of a continent so we attract huge numbers of migrating fish and birds that depend on our land and seas for survival.

“It’s a landscape that’s been modified hugely by human intervention; the fortunes of individual species have fluctuated greatly over centuries. Because we’re an overpopulated country there are no real wilderness areas left. Every part of our countryside is now accessible. Manmade and nature now exists together.”

Packham has long argued that it’s the preservation of natural habitats that should come before the needs of individual animals. It’s an argument that led to him questioning the wisdom of spending billions on saving pandas when the animals’ natural habitat is rapidly being destroyed.

Last year he said pandas should be “let go with a degree of dignity”. He maintains his stance. “It’s always the natural environment that comes first,” he says. “Without it there is no environment for animals to survive.”

The 49-year-old naturalist started his career as the punkish poster boy for young greenies on The Really Wild Show. He’s now evolved into a hardened eco-warrior unafraid to speak his mind. “I’ve been talking about saving wildlife for most of my life,” he explains.

“One thing I’ve learnt is that I know I will have a job for life – that’s the scale of the problem.”

Packham has recently courted controversy for tackling an issue he perceives as the biggest problem facing the world – spiraling populations. He told the Telegraph last week that humans were “sowing the seeds of a mass-extinction event” by not regulating population growth.

But he admits even debating the various potential answers is hugely problematic. “There are hideous examples throughout our history of how humans have been very successful in killing each other,” he explains.

“Of course I’m not advocating people should be killed off en masse or that we should stop people in the developing world from having families,” he says.

“But the problem needs to be met head on. The single biggest danger facing the world is overpopulation.”

Two of the ideas Packham proposes are increasing contraception in societies where it’s currently taboo, and improving standards of living in the world’s poorest regions. “The largest population growths are occurring in the developing world,” he says. “Science needs to be used to sustain our population better.”

But is technology enough to save the planet? “I don’t think the barrier is science. I fear that by the time we’ve all woken up to the problem it might be too late.”

Nor does he believe cuts to government’s environmental budgets should be a barrier. “I am an optimist. We have the chance to save our world but I fear sometimes we lack the urgency to do it.”

(First published in The Big Issue in November 2010)