“My mother will hold testament to this,” John Barrowman bellows across the room in his American burr to his mum, Marion, who’s sitting quietly in the corner, “I don’t relax very often, do I?” No stranger to towering hyperbole, Barrowman has for once made an understatement.

If he’s not saving the world from mortal peril as Captain Jack Harkness in the new series of Torchwood, releasing an album co-penned by Gary Barlow, judging musical talent  shows or signing up to play Robin Hood in panto in Cardiff, the Dancing On Ice star confides that sleeping, or indeed, sitting still, aren’t high on the agenda. 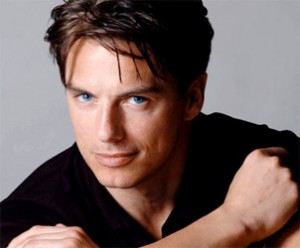 “Even at home I always have something to do. I’ll be eating my dinner while surfing and watching TV, isn’t that right?,” he says in the direction of his nodding mum, conjuring up a bizarre image of eating and bodyboarding bravura.

“The only time I really relax is when I’m on an airplane. My phone is turned off – it has to be, it’s the law – and what I do is sleep.” Cue sensational story; the world’s most hyperactive entertainer admits to catching forty winks. But only sometimes.

The Big Issue meets Barrowman at a press launch ahead of his run in Robin Hood at Cardiff’s New Theatre, which begins in December. That’s right, December. It’s a scorching June afternoon. The temperature in the interview room in Cardiff Castle is sweltering. Barrowman explains: “If you wanna be part of the John Barrowman experience, you gotta book ahead!”

The new series five-part series of Torchwood got underway this week on BBC One. Called Children of Earth, it finds Barrowman reprising his role at Captain Jack Harkness alongside debonair co-stars Eve Myles and Gareth David-Lloyd.

The trio battle a mysterious alien presence that’s caused every child on Earth to stop moving. Barrowman describes the series as a “roller coaster ride through five brilliant episodes. They’re mind blowingly cinematic, there’s going to be some shocks, some surprises and in episode three there’s a revelation that will make your head spin.”

“There’s always been dark stuff in Torchwood,” he continues. “But this time we’re going back to the beginning of the story with Captain Jack; you’re going to find out a lot about him that you didn’t know before.

“You realise that he is a troubled hero and he’s dealing with a lot of shit on his shoulders,” he explains. “It’s a dark story for dark times, maybe the darkest Torchwood series so far.”

Despite his boundless enthusiasm for the new series, Barrowman caused a mini storm last week when he criticised BBC programmers for cutting the new Torchwood series from 13 episodes to five.

“I’m going to get a little political and I’ll probably get into trouble for it,” he told a journalist, “but I felt we were being punished.”

If there’s any lingering umbrage over the series being cut, Barrowman isn’t letting on. Asked how he thinks Torchwood – BBC Three’s biggest ever ratings hit – has maintained momentum, and he’s unequivocal.

“It’s the brilliant writing,” he replies instantly. “The brilliant producers and the genius of (writer) Russell T Davies. I’m maybe patting myself on the back a little bit but with Eve, Gareth and myself, we’ve got an awesome cast. We just love that gig.

“I love Captain Jack,” he continues with eye-popping passion, “he’s changed my life. If someone said to me you’re only going to play Captain Jack for the rest of your life, I’d be happy.

“Nothing can beat walking down the street and a little boy or girl saying, ‘I love you Captain Jack’. You can’t ask for anything more, it’s the best feeling in the world.

Still dividing his time between London and South Wales, where he owns a house on the coast, Barrowman spends his spare time renovating classic cars. “I’m always looking online to buy them,” he explains.

“My family are my biggest critics,” he adds. “I’ve let them watch episodes one to four of the new series and normally they would get up and have drink [but] they didn’t move a muscle. If it was boring or dull, they’d turn off, “ he explains. “But they didn’t,” he says, flashing The Big Issue the hugest grin.