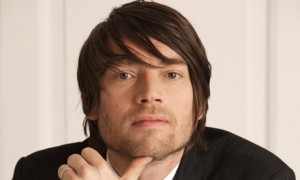 Like the music he’s made with Damon Albarn and co, James is nothing if unpredictable. At Britpop’s height, James was a Bollinger quaffing social raconteur who drove emotionally fragile band mate Graham Coxon to the brink of insanity and Benny Hill-inspired pop videos. James once owned keys to The Grouch Club and claims to be responsible for 1% of the UK’s Champagne imports in 1996.

Now reinvented as a sober astronomer, pilot and horticulturist, James lives on a farm with his wife and three children in south west England. All that talk of big houses in the
country wasn’t a joke. He’s just added another string to his bass by presenting
The Tube once a month from Manchester. So how did it come about?

“It was just one of those phone calls you get and had to answer,”he says in a sonorous voice. “It was either you’re in trouble or you’re about to be asked to do something amazing.” Nineteen years after The Tube made its debut on Channel 4 with presenters
Paula Yates and Jools Holland, it’s making a comeback.

James, who was 14 when The Tube began, has vivid memories of the original series, which gave exposure to the likes of U2, Duran Duran and Simple Minds. Convinced the format could be vastly updated, James was on board after bumping into Konnie Huq at a
party and hearing she’d signed up.

“I hadn’t met Tony Wilson before, but I was heavily into Factory Records as a kid, the guy is an absolute legend,” James says generously. “People say you shouldn’t meet your heroes as you’ll end up disappointed. That’s bollocks; people should always meet their
heroes.”

In order to refresh his memory, James re-watched The Tube: I’ve been watching the repeats in the middle of the night on channel 793 or whatever it’s on,” James explains. “I thought it was complete bollocks ha ha, just two and a half hours of unwieldy music journalism. Flying in the face of ‘80s consumerism, yuppiedom and red Porsches, it was thoroughly objectionable to the establishment. I’m into flying in the face of things.”

The new series, which began November 3, featured live performances from New Order, Camera Obscura and Clinic, as well as the underwear-wetting prospect of REM singer
Michael Stipe chatting to Tony Wilson. James says he’s excited by the prospect
of putting on his favourite artists, and promoting new ones.

“With the new show there’s a responsibility to fill it with the best music and be editorial.
It’s important not to make it too Manchester-centric, but having said that, two of my favourite bands, New Order and The Smiths, are from the city.”

“New Order are getting a bit old now,” he adds cheekily. “I’ve actually been working with Barney [Bernard Sumner] on some things,”his voice tales off suddenly. “I’m not saying any more than that at the moment.”

Away from his new-found talent for presenting, James is enjoying sobriety and family time. “Life is treating me very good indeed. I moved to the countryside with my wife

when our first child [Geronimo] was born, but I drive up
to London regularly.” He became a dad to twin boys, Artemis and Galileo in April, and spends his time recording in his barn studio for side project Wigwam, gardening and star gazing.

“Recording my own music was about confronting weaknesses and stretching myself as an individual,” he explains. Buoyed by Albarn’s creativity, his respect for his band mate’s music is heartfelt. “I still don’t think Damon gets the credit he deserves as a songwriter, or for creating amazing work year after year,” he adds.

“I’ve not seen The Good, The Bad & The Queen play yet, but my wife saw them and said they were Incredible. Damon always does stuff for the right reasons and you couldn’t
wish to work with a better songwriter.”

There could be good news for Blur fans too, according to James, as a reunion with erstwhile guitarist Graham Coxon could be on the cards: “We’ve all been talking to each
other recently and I chatted to Graham the other week. It seems everyone has kiss and made up now and there could be a happy ending.

“We’re going back into the studio next year to record and obviously we all want Graham on board, but we will make a record with or without him…It’s looking hopeful. Watch
this space.” Despite James’ infectious enthusiasm, there’s been no word from Coxon.

James’ current muses are Joni Mitchell, Roy Orbison and Eddie Cochran. “I’m going back in time musically,” he says. “I’m trying to see beyond The Beatles by listening to
the stuff they were influenced by. You think you can’t go back any further than Eddie Cochran when it comes to rock ‘n roll but you always can. Have you heard Tea For Two [by Vincent Youmans and Irving Caesar?] It’s a ****ing amazing song.”

Talk of co-writing an opera with The Krays actor Steven Berkoff, is currently on ice, but James is expecting a visit to his farm from Scottish chanteuse KT Tunstall next month to
work on an as-yet untitled project. Despite this wholesome showbiz bonhomie,
James’ favourite subjects are gardening and astronomy. Gigwise is keen to learn
more. With the beetroot harvest now over, James says it’s time to bring in the tomatoes.

“Here’s a great cooking tip for Gigwise,” he adds, “stick apples in the oven for an hour when you’re roasting pork. The smell and taste is out of this world.”

“People tend to have a negative perception of agriculture in this country,” James says with a touch of dismay. “That’s a shame, when I’m down on my allotment and I’m picking apples I realise this is real Garden of Eden stuff. It’s a religious experience.” When he’s not knee-deep in compost, h’ss looking at stars: “We’re living in a golden age of space travel and will witness monumental changes in our lifetime,” he says. “Last night was crystal clear, I never get over the wonder of looking into deepest space,” he adds. Neither do we Alex, neither do we.